The question of Just War has arisen once again in light of recent thoughtful articles about Islamic terrorism, ISIS and related matters.

"What ISIS Really Wants" by Graeme Wood  in the March 2015 edition of THE ATLANTIC and other articles, along with the just released film AMERICAN SNIPER have raised the issue of justified armed resistance to jihad in the popular and social media. 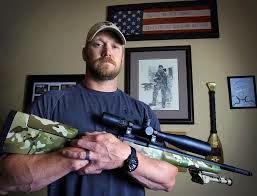 The pressing need for military re-engagement by Western nations in the Middle East to stand against the brutal slaughter of Christians and others there is a pivotal question for all nations even as the jihadists plan and execute attacks around the world.

St. Augustine of Hippo and St. Thomas Aquinas, along with other Church Fathers, have explicitly outlined how going to war to protect and defend the innocent may be a Christian obligation in such circumstances. The present need for application of the principles of just war in a global context has not been so clearly defined in modern times since the Nazi, Fascist and Japanese aggression which brought about World War II.

St. Augustine held that a Christian could be a soldier and serve God and country. Individuals should not resort immediately to violence, he taught, but  God has given the sword to government for good reason (Romans 13:4).

His philosophical position was:
"What is here required is not a bodily action, but an inward disposition. The sacred seat of virtue is the heart." 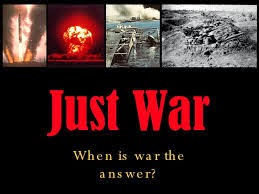 Augustine taught that peacefulness in the face of a grave wrong that could only be stopped by violence is a sin. Defense of self and/or of others may be a necessity, especially when authorized by a legitimate authority:

"They who have waged war in obedience to the divine command, or in conformity with [God's] laws, have represented in their persons the public justice or the wisdom of government, and in this capacity have put to death wicked men; such persons have by no means violated the commandment, 'Thou shalt not kill.'

In his work THE CITY OF GOD, Augustine began to outline the conditions necessary for war to be just, and so originated the concept of Just War Theory:

". . .  the wise man will wage just wars. As if he would not all the rather lament the necessity of just wars, if he remembers that he is a man; for if they were not just he would not wage them, and would therefore be delivered from all wars."

Building on this, St. Thomas Aquinas used the authority of Augustine's arguments to lay out in detail the conditions under which a war could be just:

1.  Just war must be waged by a properly instituted authority such as the state.  Proper Authority represents the common good: which is peace for the sake of man's true end i.e. God.

2.  War must occur for a good and just purpose rather than for gain.  It must be "in the nation's interest" not just an exercise of power.

3.   Peace must be a central motive even in the midst of violence.

According to Just War Theory as it has developed, the right to go to war must be accompanied by just action in war.

The theory of Just War involves, then, both  jus ad bellum (the right to go to war), and jus in bello (right conduct within war). 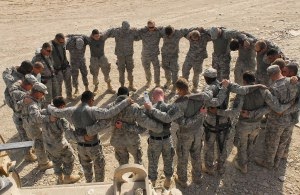 jus ad bellum
A number of criteria must be met in order to enter justly into armed conflict:

The reason for going to war needs to be just. It must not be solely for recapturing things taken or punishing people who have done wrong.  Innocent life must be in imminent danger and intervention must be to protect life.  The US Catholic Conference said: "Force may be used only to correct a grave, public evil, i.e., aggression or massive violation of the basic human rights of whole populations."
+ Comparative justice
To overcome the presumption against the use of force, the injustice suffered by one party must significantly outweigh that suffered by the other.
+ Competent authority
Only duly constituted governments may wage war. A just war must be initiated by a political authority within a political system that allows distinctions of justice. Dictatorships like the Nazis are considered as violations of this criterion. There cannot be a genuine process of judging a just war by a regime that represses the due process of  justice.
+ Right intention
Force may be used only in a truly just cause and solely for that purpose.  Correcting a suffered wrong is considered a right intention. Material or territorial gain or maintaining economies is not.
+ Probability of success
Arms may not be used in a futile cause or in a case where disproportionate measures are required to achieve success.  If the likelihood of defeat is certain, fighting for an ideal is ruled out.
+ Last resort
Force may be used only after all peaceful alternatives have been seriously tried and exhausted or are clearly not practical. The unjust power may attempt to use negotiations as a delaying tactic and/or will not make meaningful concessions.  In this case, force may be necessary as a last resort to protect those in danger.
+ Proportionality
The anticipated benefits of waging a war must be proportionate to the expected harm that will be done. This is known as the principle of macro-proportionality which distinguishes it from the jus in bello principle of proportionality (see below).

Once war has begun,  commitment to justice in the  (jus in bello) directs how combatants must act:

* Distinction
Just war conduct is governed by the principle of distinction. The acts of war should be directed only towards enemy combatants. Civilians caught in circumstances which they did not create should not be targeted whether they are related to the enemy troops or not. Prohibited acts include terror bombing civilian residential areas that include no military targets, committing acts of reprisal, and attacking neutral targets. Combatants are not permitted to attack enemy combatants who have surrendered, are captured or are injured; or those who are not presenting an immediate lethal threat. An example would be those escaping from a disabled ship.

* Proportionality
Just war conduct is governed by the principle of proportionality. Combatants must not cause harm to civilians or civilian property beyond what is necessary for military advantage by an attack on a military objective.

* Military Necessity
Just war conduct is governed by the principle of military necessity. An attack or action must be intended to help in the military defeat of the enemy.  Attacks must be on military objectives and the harm caused to civilians must be proportional and not excessive in relation to the military advantage anticipated.

* Fair Treatment and POWs
Enemy combatants who surrender or are captured no longer pose a threat.T hey must not be tortured mistreated.

* No weapons or tactics which are malum in se (evil in themselves)
Combatants may not use weapons or other methods of warfare which are considered evil, such as mass rape, poison gas, nuclear or biological weapons.  Non-combatants may not be forced to fight against their own side.
In light of these criteria, just armed opposition to the jihadists of ISIS and related organizations can justifiably be engaged.  Not only is military action defensible but there is a moral requirement for Christians and others to use all means necessary to defeat and eradicate from the earth this evil threat to the lives and well-being of the innocent.

Posted by peregrinusto at Tuesday, February 24, 2015