An excellent meeting with Msgr Steenson was held this past Saturday in Toronto.  He spent the morning answering many questions for people from the three local sodalities seeking membership in the soon-to-be established Canadian Deanery of the Ordinariate of the Chair of St. Peter (OCSP).

Some time ago I listed on this blog a variety of the questions which have been raised regarding the North American Ordinariate. In his gentle and pastoral manner, Msgr Steenson addressed many of these and other questions.

In light of what Msgr Steenson shared with us here are some important points.

Currently the Monsignor is at a meeting of the Canadian Conference of Catholic Bishops CCCB in Ste Adele, Quebec.  They are finalizing the arrangements for the jurisdiction of the Ordinariate in Canada. He goes with the strong backing of the Holy Father who has personally asked bishops to be generous to the Ordinariates as they are formed.  The Holy Father has also, as an example, made quite a large donation to the Ordinariate of Our Lady of Walsingham (OOLW) in the UK.

Msgr. Steenson shared with us that it is the Holy Father who has championed, promoted, shepherded and indeed insisted that all of the canonical and other hurdles to the erection of Ordinariates for Anglicans be solved.

So, here are some of the responses to the nitty gritty.

Individuals in each small sodality (associations of Oridinariate-bound Catholics in the Archdiocese of Toronto and the Diocese of Hamilton) will be received into the Ordinariate of the Chair of St Peter once each person has completed and sent a form to Msgr Steenson stating their desire for membership and the facts relating to former Anglican status or family relationship to an Anglican Catholic i.e. anyone raised as an Anglican or married to or the child of such former-Anglican Catholics.

All Latin Rite and all other Catholics are welcome to worship with Ordinariate Catholics and are indeed invited to. However, those not from an Anglican background or related to a former Anglican may not officially be listed as member for purposes of holding an official position in an Ordinariate.

This, of course, does not stop anyone from fulfilling their Sunday obligation at Ordinariate Masses on an occasional or a regular basis just as they may do so at a Chaldean, Ukrainian, Syrian or any other of the many non-Latin Rite Catholic communities in Toronto (BTW these Eastern Rite Catholic churches also have married priests - more on this later).

The sodalities or groups will proceed to constitute themselves in such a way that they can grow towards parish status within the Ordinariate in co-operation with their local Latin Rite diocese. Their priests will be incardinated within the Ordinariate but will co-operate with, occasionally assist and  have the support of the local Latin Rite bishop.

The purpose of the CCCB consultation is to work out the logistics for a Canadian Deanery of the OCSP possibly named with the patronage of St. John the Baptist, St Joseph or both.  This deanery will give a structure to the Canadian Ordinariate sodalities and parishes so that when a distinct Canadian Ordinariate is formed the structure will allow for easy transfer from the OCSP.

There is to be a kind of synodical structure to the Ordinariates as provided for in Anglicanorum Coetibus (AC) and its attendant norms. Msgr Steenson indicated that lay participation is one of the distinctive patrimonial features of the Ordinariates. The Governing Council is now in formation.

There will be deanery and parish level structures to which lay people will contribute and participate in.

Will the Ordinary have real control over the administration and assets of the Ordinariate which, in the case of Canada and the USA, is spread over a continent?

Finances will be held by sodalities, parishes and the Canadian Deanery in such a way that they can function ultimately within an independent Canadian Ordinariate with a Canadian Ordinary and Governing Council.

3. What role will the local bishops play?

Of course the role of the local Latin Rite bishop is critical. It is he who will ordain Ordinariate priests, at least initially. There is no Ordinariate bishop as yet, however, celibate priests could be named bishops and could function as ordinaries or under an ordinary in the future.

The local Latin Rite bishop will have a close association with the Ordinariate clergy and they will participate in and share in local priestly associations, responsibilities and benefits. In the USA bishops have already taken on this responsibility for men ordained in their dioceses. In fact, Msgr Steenson pointed out how keen US bishops have been to ordain Ordinariate priests who give a boost to the local diocese in a number of ways.


4. Is there any way that conservative Anglicans (those who have evangelical sympathies and others) might be persuaded to enter into full communion with the Catholic Church through Ordinariates?

Msgr Steenson addressed this question directly in terms of those who have questions about the papacy and authority. He pointed out that it is a matter of primary catechesis to explain the authority of the Pope to those interested and moved by the Holy Spirit to explore full communion with the Catholic Church.

It was observed that many Anglicans/Episcopalians are desperately seeking communion in an orthodox community in light of the melt-down of the liberal churches in North America. The failure of many Anglican/Episcopal dioceses is exponential as bishops and primates dance (literally and figuratively) around their  altars in their headlong rush to post-modernist secularism: the culture of entertainment as opposed to worship.

This brings us to the sublime matter of worship which for Ordinariate-bound Anglicans is at the heart of communion in the Catholic Church.


Will the liturgy be familiar to Anglicans or will there be such changes that worship feels foreign?  Will the great Anglican musical tradition be nurtured and developed within the Ordinariates?

In answer to questions about the forms of liturgy for the Mass, Msgr. Steenson clarified a number of issues relating to rites, practice and faculties for priests to celebrate the Anglican Use Mass in Canada.

First of all, there is a new form of the Anglican Use Mass which has been adapted for use in Canada and is now approved by Rome. The Book of Divine Worship (BDW) Mass is no longer authorized as printed due to changes in the Novus Ordo (3rd edition) and other practical issues.

All sodalities and parishes are to use the Canadian form of the Mass modified under the direction of Msgr Steenson and edited by the soon-to-be-ordained former Bishop Wilkinson. This is now the only authorized form for Anglican Use Mass in Canada. 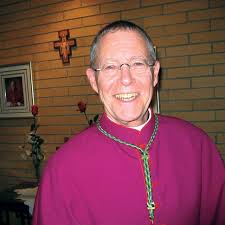 In the longer term there is a very distinguished group of international scholars working with the CDF and the CDW in Rome to produce a full sacramentary and prayer book for use in all ordinariates. A common set of texts which will be used in the UK, Australia, Canada, the US and other countries will be developed.  This is estimated to be a five year process but there will be individual rites authorized temporarily in the meantime.

Initially, ordinariates will rely upon the generosity of the local bishops to provide clergy as they are now doing.  Soon (by Easter it is estimated) more priests will be ordained to the Ordinariate in addition to the two currently ordained in Calgary.
There are some twenty on the list at present. They are to take a special training sessions supervised through the seminary in Houston under the Direction of Msgr Steenson.

These will be mainly retired men as there are only small resources in each sodality to support the growth of ordinariate parishes. Married men who have been Anglican clergy will, of course, be considered on a case by case basis, as is the norm in the Latin Rite in light of the celibacy rules.

There is one case in the UK of a married seminarian not previously ordained as an Anglican being considered for ordination. Again, AC provides for such ordinations to be determined on a case by case basis.


Much more to follow . . . Pray for Msgr. Steenson as he meets with the CCCB

More beautiful music offered by the four part choir of the Toronto Anglican Use Sodality.  What a treasure this patrimonial music is in the context of sacral language and Catholic teaching.

Here are some clips from the Anglican Use Sung Mass on Sept. 9 sponsored by the Toronto AU Sodality.

Thanks to great efforts of members of the sodality a Sung Mass will be offered each week on Sundays at 1:45 pm,


Posted by peregrinusto at Tuesday, September 11, 2012 No comments:

Choral Mass every Sunday in Toronto

A traditional Anglican Choral Eucharist will be celebrated every Sunday beginning September 9 at Sacre-Coeur Church at 1:45 pm in Toronto. The rite is that of the Anglican Use from the Book of Divine Worship as approved for use by the CDF - sacral or "Prayer Book" English texts adapted to conform with Catholic liturgical norms.

A four part choir under the direction of Peter Mahon will sing the ordinary and propers for the weekly Mass as the Toronto Anglican Use Sodality develops its liturgical offerings which began in May of this year.

A children's programme and refreshments following Mass will be offered each Sunday as the Sodality welcomes all those, Anglicans, Lutherans and others who are exploring full communion with the Catholic Church in response to our Lord's prayer ut unam sint -- that they all may be one.

Under the direction of Toronto A.U. Sodality Chaplain Fr. Eric Rodrigues and thanks to the assistance of the Archdiocese of Toronto and the Oratory of St. Philip Neri, priests with knowledge of the Anglican liturgy and patrimonial music provide for the weekly celebration of Sunday Mass.

Here is a clip of the last Choral Eucharist before the summer - Corpus Christi, June 10: