As we prepare for Pentecost Sunday (Whitsunday) and the Confirmation of members of  the Catholic Parish of St. Thomas More Church, Toronto, we ask the guidance of the Holy Ghost as we discern the way forward for our ministry in the city.

The following Novena to the Holy Ghost (nine days of prayer) is perhaps the first novena composed.  The novena joins our prayers with those of Our Holy Mother and the apostles.

In the Name of the Father, + and of the Son, and of the Holy Ghost.  Amen.

Each day, the Novena begins with this prayer:

O HOLY SPIRIT, our Lord and our God, we adore thee and humbly acknowledge here in thy sacred presence that we are nothing, and can do nothing, without thine operation within us. Come, great Paraclete, thou Father of the poor, thou Comforter of the blest, fulfill the promise of our Saviour, who would not leave us orphans. Enter our minds and hearts as thou didst descend on the day of Pentecost upon the Holy Mother of Jesus and upon his first disciples. Grant that we may have a part in those gifts which thou didst so graciously bestow upon them.

Take from our hearts all that is not pleasing to thee and make of them a worthy dwelling-place for Jesus. Illumine our minds, that we may see and understand the things that are for our eternal welfare. Inflame our hearts with the pure love of the Father, that, cleansed from attachments to all unworthy objects, our lives may be hidden with Jesus in God. Strengthen our wills, that they may be conformed to the will of our Creator and guided by thy holy inspirations. Aid us to practice the heavenly virtues of humility, poverty, and obedience which are taught to us in the earthly life of Jesus.

Descend upon us, O mighty Spirit, that, inspired and encouraged by thee, we may faithfully fulfill the duties of our various states in life, carry our particular crosses with patience and courage, and accomplish the Father's will for us more perfectly. Make us, day by day, more holy and give to us that heavenly peace which the world cannot give.

O Holy Spirit, thou Giver of every good and perfect gift, grant to us the special intentions of this novena of prayer. May the Father's will be done in us and through us; and mayest thou, O mighty Spirit of the living God, be praised and glorified for ever and ever. Amen.

Here is said or sung the Veni Creator Spiritus:

and lighten with celestial fire,

thou the anointing Spirit art,

who dost thy sevenfold gifts impart.

Thy blesséd unction from above,

is comfort, life, and fire of love,

the dullness of our blinded sight.

Anoint and cheer our soiled face

with the abundance of thy grace.

Keep far our foes, give peace at home;

where thou art Guide, no ill can come.

Teach us to know the Father, Son,

that through the ages all along,

this may be our endless song:

OUR FATHER, who art in heaven; hallowed be thy Name; thy kingdom come; thy will be done, on earth as it is in heaven. Give us this day our daily bread; and forgive us our trespasses, as we forgive those who trespass against us; and lead us not into temptation, but deliver us from evil.

HAIL MARY, full of grace, the Lord is with thee; blessed art thou amongst women, and blessed is the fruit of thy womb, Jesus. Holy Mary, Mother of God, pray for us sinners now, and at the hour of our death. Amen.

Here is said the Proper Prayer for the Day:

Come, O Holy Ghost, the Lord and Lifegiver; take up thy dwelling within our souls, and make of them thy sacred home. Make us live by grace as adopted children of God. Pervade all the energies of our souls, and create in us fountains of living water, springing up unto eternal life. 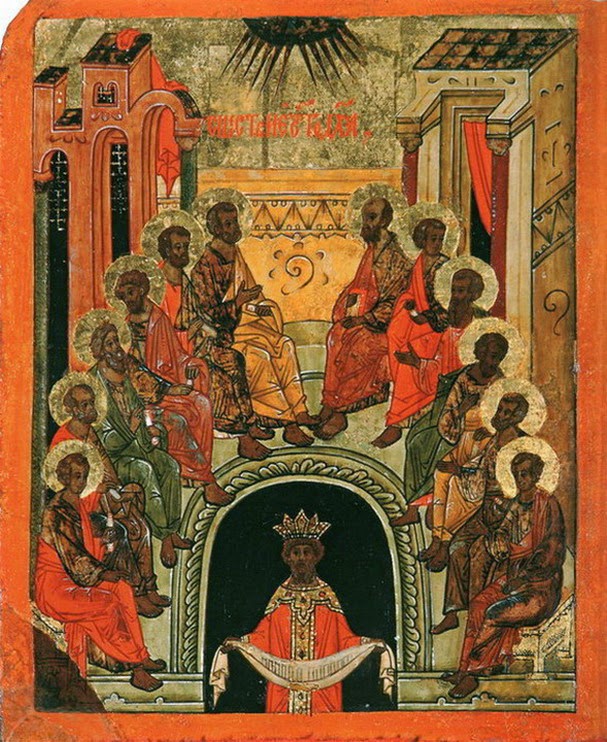 Come, O Spirit of Wisdom, and reveal to our souls the mysteries of heavenly things, their exceeding greatness, and power, and beauty. Teach us to love them above and beyond all the passing joys and satisfactions of earth. Show us the way by which we may be able to attain to them, and possess them, and hold them hereafter, our own forever.

Come, O Spirit of Understanding, and enlighten our minds, that we may know and believe all the mysteries of salvation, and may merit at last to see the eternal light in thy light; and in the light of glory to have the clear vision of thee and the Father and the Son. 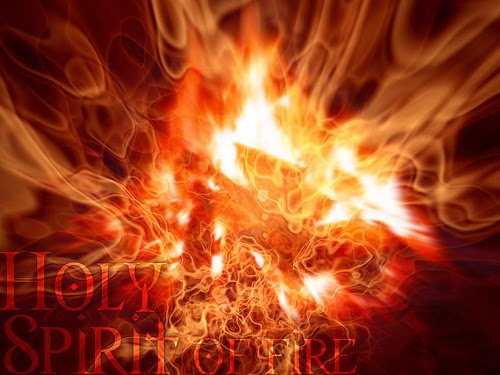 Come, O Spirit of Counsel, help and guide us in all our ways, that we may always do thy holy will. Incline our hearts to that which is good, turn them away from all that is evil, and direct us by the path of thy commandments to the goal of eternal life.

Come, O Spirit of Fortitude, and give courage to our souls. Make our hearts strong in all trials and in all distress, pouring forth abundantly into them the gifts of strength, that we may be able to resist the attacks of the devil. 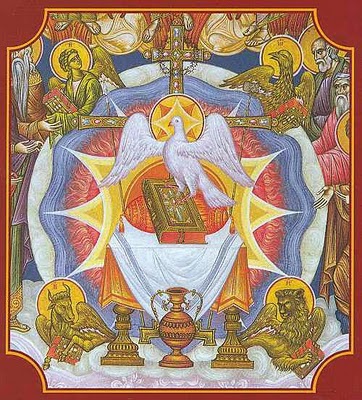 Come, O Spirit of Knowledge, and make us to understand and despise the emptiness and nothingness of the world. Give us grace to use the world only for thy glory and the salvation of thy creatures. May we always be faithful in putting thy rewards before every earthly gift.

Come, O Spirit of Piety, possess our hearts, and incline them to a true faith in thee, to a holy love of thee, our God. Give us thy grace, that we may seek thee and find thee, our best and our truest joy.

Come, O Spirit of holy Fear, penetrate our inmost hearts, that we may set thee, our Lord and God, before our faces forever; and shun all things that can offend thee, so that we may be made worthy to appear before the pure eyes of thy divine Majesty in the heaven of heavens.


Come, O Holy Comforter, and grant us a desire for holy things. Produce in our souls the fruits of virtue, so that, being filled with all sweetness and joy in the pursuit of good, we may attain unto eternal blessedness.

The following prayer concludes the Novena each day:

O GOD, who as at this time didst teach the hearts of thy faithful people by sending to them the light of thy Holy Spirit: grant us by the same Spirit to have a right judgement in all things, and evermore to rejoice in His holy comfort; through Jesus Christ thy Son our Lord, who liveth with thee in the unity of the same Holy Spirit ever, one God, world without end. Amen.
Posted by peregrinusto at Saturday, May 18, 2019 No comments:

The Twitter Feeding Frenzy is a Dangerous Development for Truth

The internationally renowned historian and economist,  Niall Ferguson, has recently listed listed the names of  public intellectuals, and writers who have been publicly disciplined and punished for various “thought crimes.” An article  by C.C. Pecknold in the Catholic Herald  warns that with this kind of prejudice to thought “critical thinking” is going to die.
The case of conservative philosopher and public intellectual Sir Roger Scruton provides a prime example.
Pecknold states that last year, Scruton, who has written extensively on aesthetics, was appointed as chairman of the British government’s commission on buildings. Having been knighted in 2016, Scruton has only gained in stature as a thinker who understands how the built environment contributes to the common good of a nation. Yet it is also this increase in his stature which has made him into an ideal target for partisans.
Niall Ferguson writes:
Almost immediately after that, however, the attacks from the left began. The campaign against him culminated last week in the publication of a cynical hit-piece in the New Statesman, which misrepresented his views on a number of issues — the influence of George Soros, China’s policies of social control and the origins of the term “Islamophobia” — in order to portray him as a racist. The government took the bait. James Brokenshire, the secretary of state for housing, immediately sacked him. A spokeswoman for the prime minister described his comments as “deeply offensive and completely unacceptable.”
In reality, Scruton had been framed. The author of the New Statesman hatchet job, George Eaton, had edited quotations and inserted his own commentary with the clear intention of getting him sacked. He further massaged the “gotcha” quotes (“outrageous remarks”) on social media. Having achieved his objective, Eaton jubilantly published a photograph — later deleted — of himself drinking champagne from a bottle with the tagline: “The feeling when you get right-wing racist and homophobe Roger Scruton sacked as a Tory government adviser.”
Day by day, week by week, month by month, we see this despotic pattern repeated in various ways. The list of names receiving this “treatment” — Charles Murray, Ryszard Legutko, Jordan Peterson, Samuel Abrams, Mark Regnerus, Peter Boghossian, Roland Fryer, Nigel Biggar, Bruce Gilley — are intellectually diverse, and can only loosely be held together by the multivalent adjective “conservative”. These are men with whom you might profitably disagree. Or even, perhaps, in a dispute with them, you might come to see some of the same truths, or split the difference on claims which at first glance looked irreconcilable with your own. That is, considering these thinkers as potential interlocutors, rather than enemy combatants, might actually make you a better thinker.
Ferguson continues:
In every case the pattern is the same. An academic deemed to be conservative gets “called out” by a leftist group or rag. The Twitter mob piles in. Mindless mainstream media outlets amplify the story. The relevant authorities capitulate.
What is happening before our eyes is a gradual but steady attack on truth, and the conditions required for its pursuit. If the attackers were confident that the truths they hold dear could be arrived at by any reasonable person, they could simply argue for those truths. But since they have arrived at their orthodoxies primarily through the category of desire, rather than through reasoned demonstration, they do not feel their views can survive vigorous public dispute. As a result, they use overwhelming coercive power — cultural and political — to achieve hegemony. It is in this use of power, more than the tendencies of any individual politician, that our time most resembles the 1930s.
C.C. Pecknold,  Associate Professor of Theology and Fellow of the Institute of Human Ecology at The Catholic University of America
Posted by peregrinusto at Wednesday, May 01, 2019 No comments: