May 14 Statement of Archbishop Collins

The following is a statement by Archbishop Collins again clarifying the process for the implementation of an Ordinariate in Canada.  This statement again outlines the process and helps those sincerely looking to move forward.


Statement of Archbishop Thomas Collins
on the implementation of Anglicanorum Coetibus in Canada
With regard to the public discussion concerning the process for the implementation of the Apostolic Constitution Anglicanorum Coetibus in Canada, I would like to make the following statement:
Canada is a vast country, and widely scattered across it are small groups of Anglicans who have expressed an interest in entering full communion with the Catholic Church through the provisions of Anglicanorum Coetibus.  As Delegate of the Congregation for the Doctrine of the Faith for the implementation of the Apostolic Constitution, I have asked certain priests in different regions of Canada to serve as "mentor priests", to work with these small groups of Anglicans in their geographical area. These mentor priests have been asked as their first task to visit the communities, to get to know them, to respond to any questions, and to get a sense of the number of people who are interested.
Certainly, the experience of pastoral relationships and ecclesial structures such as those of the ACCC must be honoured with respect and gratitude. But the ACCC is not the only grouping of Anglicans in Canada.  A fruitful implementation of Anglicanorum coetibus requires that all groups of former Anglicans be equal within the new ecclesial structure, and each individual Anglican considering entering full communion with the Catholic Church through Anglicanorum Coetibus be fully informed and freely decide whether or not to proceed.
I realize that there are complicated corporate and legal issues relating to property which must be resolved if ACCC parishes seek to be part of an ordinariate in Canada.  But those challenges can surely be overcome. The key reality is that Anglicanorum Coetibus offers a fresh beginning, a sign of hope, for any group of Anglicans who freely decide to be received into the Catholic Church, accepting the faith articulated in the Catechism of the Catholic Church, and forming within the Catholic Church communities in which some elements of the distinctive Anglican patrimony flourish and enrich the whole Church.
For more information on the process of implementing Anglicanorum Coetibus in Canada, please refer to the article on that subject which has been on the website of the Archdiocese of Toronto for several months (www: archtoronto.org).

With the first wave of almost 1000 received into the Ordinariate in the UK in the past month and a host of ordinations across the pond this past week, Canadians and Americans are gathering across the continent to prepare for the establishment of Anglican Ordinariates in North America.

The first meeting of the Toronto Ordinariate group (yet to be officially named) took place appropriately enough at the Newman Centre of the University of Toronto.  If there was a theme that developed in the discussions preceding Evensong it was one of thankfulness for the gift of unity which the Holy Father has offered. 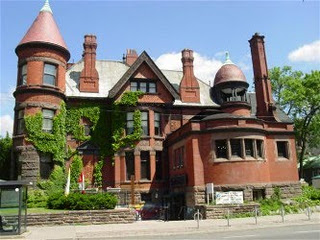 Fr. Michael, the director of the Newman Centre, warmly welcomed Anglicans and others in the beautiful Victorian mansion which hosts Catholic students and seekers at the U of T next to what he describes as the very English-style Chapel of St. Thomas Aquinas which will host Evensong on Sunday afternoons for the group in formation.

Anglicans, along with former Anglicans who have long been in full communion with Rome joined with people of various backgrounds including Mennonite, Pentecostal and others as they began to explore the meaning of Anglicanorum Coetibus as their charter on the road to the unity which our Lord commands us to work towards.

So, a good beginning for the charter group in Toronto which joins with parishes in Calgary, Ottawa, Victoria, Halifax and many other small communities around the country on the pilgrimage to full communion with the Holy See.  It will be a challenging and exciting journey on which we expect to meet many tests but a journey which is being made with the prayers of that great company which no one can number.

The first challenge is to gather letters from each family and individual making an intention to journey with the group.  These will be given to Archbishop Collins by the end of May as he prepares his report.  This is being done in the hope that during the course of the coming year, individuals within the various groups will be received into full communion as the first wave in North America.

The pioneers are on the move this month of Mary.

Our Lady of Walsingham, pray for us;
Blessed John Henry Newman, pray for us.
Posted by peregrinusto at Saturday, May 07, 2011