The Blessing and Distribution of Palms will be celebrated as part of the regular 1:45 pm Anglican Use Sung Mass at Sacré Coeur Church this Sunday. Weather permitting the blessing will take place on the steps of the church at the corner of Sherbourne and Carlton streets.

Catholics and others who can join with the Toronto Sodality in this public witness to the faith are warmly welcomed. There will be refreshments, as usual, in parish hall after Mass as we welcome our chaplain, Fr. Eric Rodrigues, back from Rome where he has been for the past several weeks assisting the cardinal at the election of Pope Francis. 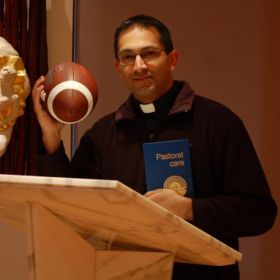 We look forward to hearing from Fr. Eric about his Roman adventure and the great hope that has been given to the world in the election of Pope Francis I following our beloved Pope Emeritus Benedict XVI.

It looks like they went for a long one and scored a touchdown!
Posted by peregrinusto at Wednesday, March 20, 2013 No comments:

At the first annual meeting of the Toronto Anglican Use Sodality (TAUS) much was discussed. TAUS still comes under the auspices of the Archdiocese of Toronto but is soon to be received into the Personal Ordinariate of the Chair of St. Peter (CSP). A name for the Sodality and future Mission Parish was discussed.

A variety of names were considered in light of the names of other groups and parishes in the Deanery of St. John the Baptist (DSJB - the Canadian Deanery of CSP). Amongst these were St. Thomas More - the name of the previous Toronto society which unsuccessfully sought to form an Anglican Use mission in the 1990s. Others include St. Augustine of Canterbury, St. John Fisher, St. Edmund Campion, St. Benedict and Blessed John Henry Newman (this latter name has already been used by a Canadian group).

It was decided to reconvene TAUS after Easter to select a name to submit to the dean of DSJB, Fr. Lee Kenyon of Calgary, for approval by the Ordinary. Other names for the mission parish along with interest in TAUS will be sought during the intervening time.

In the meantime, TAUS continues to meet for Sung Mass weekly at 1:45 pm Sundays at Sacré Coeur with wonderful patrimonial Anglican choral music and a variety of celebrant priests each with faculties to conduct the interim approved AU rite from the Book of Divine Worship in the classic sacral English of the Book of Common Prayer. The AU rite for the Ordinariates worldwide will be formally updated in Rome at a later date and published in missal form.

Considerable excitement was expressed about plans to develop a youth choir to sing the traditional music of the AU Mass and other music of the Western choral canon. In addition, to providing a second choir for the mission parish this will be an opportunity to reach out to more young people and their families.

It was also decided to reconsider the Sunday youth program during the Liturgy of the Word so that families may attend Mass together thus exposing children to the full music and ceremonial of the AU Mass and, at the same time, recruiting altar servers and others to assist with the provision of weekly Eucharistic hospitality.

A TAUS budget for the use of the church, organ and organist as well as other expenses for the choir and stipends for priests was considered in light of the start up loan from the Archdiocese of Toronto which is repayable, without interest, when the sodality is on a solid footing. The loan money goes directly to Sacré Coeur to help defray the parish's expenses.

TAUS hopes to have a priest to succeed its excellent chaplain, Fr. Eric Rodrigues (currently in Rome as Cardinal Collins' assistant). While Fr. Eric is away there are five priests in the Toronto area who have been instructed in the Anglican Use rite for Mass.  These priests take turns celebrating the Anglican Use Sunday Mass in the afternoon. Sung Mass has been celebrated by TAUS weekly without interruption since May 2012.

Approaching its first anniversary of weekly Mass in Toronto, the sodality is hoping that an Ordinariate priest will be ordained for TAUS later this year or by Spring 2014 after the group has been received into the Ordinariate formally with its new name. The priest will be pastor to the group but also available to assist with chaplaincy or parish ministry in the Archdiocese at the discretion of the Cardinal and the Ordinary, Msgr Steenson.

Communication about the activities of TAUS were the focus of discussion at the annual meeting. Cards will be distributed by members and a sign placed outside Sacré Coeur at the corner of Carlton and Sherbourne stating "ENGLISH MASS 1:45 pm SUNDAY" to offer Catholics in the community another alternative for the Sunday obligation and to make the community aware of TAUS.

Advertising in the CATHOLIC REGISTER will be focused on special events - Easter Sung Mass, etc.  Other strategies to make Anglicans, Lutherans and other Protestants aware of TAUS and its mission for Christian Unity were discussed.

The small but growing sodality looks forward to a year of development as it seeks to be faithful to the Gospel call of Jesus "that they all may be one".