Epiphany and the Call to Fish

This Epiphany Season, following the formation of a new Ordinariate, North American Anglicans consider how we can best preserve and develop the patrimony which God has put under our stewardship. We hear at Sunday Mass the message of Jesus' call to the fishermen.

"Leave it all behind", he says, "and come follow me" with the promise that God will show us new seas to fish.  Indeed the seas are full with so many looking within their deepest selves for meaning.

Many would find faith and meaning through what Anglican Catholic patrimony can offer -- beauty in liturgy, care and pastoral concern in small parishes, preaching based upon the heritage of Patristics with Catholic tradition and orthodox teaching, along with the best of English music, amongst other things.

It is our call to be part of this epiphany and, by God's grace, to "show forth" the treasures of the English Catholic Church which have been developed into an Anglican patrimony throughout the world.

This is the bait which will attract young people, Lutherans and other non-Catholics, a vibrant Anglican Catholicism which contains the fulness of Catholic tradition which has responded to the challenges and legitimate questions of reform.

Yes, this is an expression of Catholicism which responds to the many young and thoughtful people repulsed by the secular culture of death but also unimpressed by the banal and trite forms of liberal Protestantism or the gimmicky entertainment of the mega-church or many Latin rite parishes.

We are called to carry this patrimonial gift back into full communion with the Catholic Church. As said previously here, the Catholic Church is the only place in which Anglicans can find a true and lasting home, one where communities can be nurtured to serve future generations (see the posting : An Ordinary Anglican).

What is needed now is time and space for those crossing the Tiber to settle into communities which are secure within the Catholic Church and under the care of our Ordinary. These must be communities where those coming from Anglican and other churches to serve may be free from the endless politics of the Anglican Communion, of the alphabet soup or other Protestant sects so that they can practice the Catholic Faith, attend weekly Mass and get on with the pastoral and mission work which Jesus calls us to -- to get down to new seas fishing for the souls that God calls us to.

It is time to leave behind the old ways, bad habits, petty rivalries and yes the security of the old structures and to say with Simeon:

Lord, now lettest thou thy servant depart in peace,
According to thy Word;
For mine eyes have seen they salvation
Which thou has prepared before the face of all people
Posted by peregrinusto at Sunday, January 22, 2012 No comments:

The 12 Days of Christmas and the Ordinariate 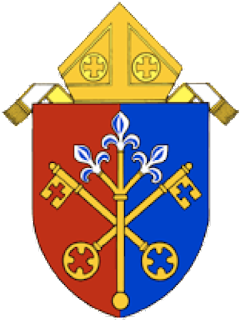 The traditional Christmas carol The Twelve Days of Christmas was written by English Jesuits in the 16th Century when Catholicism had gone underground following the Reformation.  Traditionally for Catholic Christians throughout England and still today the Christmas season begins on Christmas Day and ends twelve days later on the Feast of the Epiphany (Twelfth Night).

The “eleven pipers piping” are the eleven Apostles who remained faithful after the treachery of Judas. The “ten ladies dancing” are the Ten Commandments. The “nine drummers drumming” are the nine choirs of angels which in the Middle Ages had been seen as an important element in the hierarchy of life.

Significant for the Ordinariate of the Chair of St. Peter is New Year’s Day – the eighth day of Christmas and the inauguration of the Ordinariate. The song refers to the “eight maids a milking” i.e. the Eight Beatitudes. Perhaps this is a grace note as to how we should seek to conduct ourselves in the Ordinariate.

Relatedly, we have been exhorted by our Ordinary, Fr. Steenson who said recently in his initial statment:

"The Holy Father has asked us to bring this patrimony with us: “to maintain the liturgical, spiritual and pastoral traditions of the Anglican Communion within the Catholic Church, as a precious gift nourishing the members of the Ordinariate and as a treasure to be shared.” [Anglicanorum coetibus 3].
"Here is one thing I earnestly desire to share with you from the outset:  Anglican spirituality has always emphasized the need to be
gentlemanly in all of our relationships. May you see in us always the virtue of courtesy!"

To finish the carol, we see that the “seven swans a swimming” refer to the Seven Sacraments. The “six geese a laying” are the Six Commandments of the Church regarding how we are to treat others (honour parents, don't murder, don't commit adultery, don't steal, don't bear false witness)
or the six days of creation.

The “five golden rings” are the first five books of the Old Testament called the Torah, the most sacred and important of all the Old Testament. The “four calling birds” are the Four Gospels.  “Three French hens” reflect the Catholic belief in the Trinity – the Three Persons of God or the three gifts of the Wise Men. The “two turtle doves” represent the two natures in Jesus: human and divine or the two Testaments, Old and New.

The “partridge” is, of course, Jesus himself, and the “pear tree”, his Cross.

Posted by peregrinusto at Wednesday, January 04, 2012

Wonderful news for all Christians in Canada and the USA 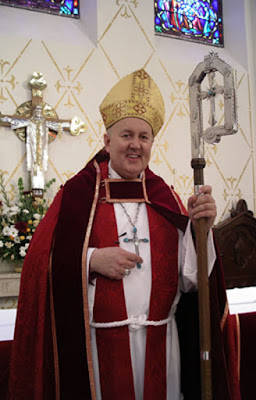 Monsignor Jeffrey Steenson, formerly Episcopal (Anglican) Bishop of the Diocese of Rio Grande (New Mexico and NW Texas), has been appointed as of January 1, 2012 Ordinary or chief pastor for the Anglican Ordinariate of The Chair of St. Peter. The Ordinariate is a body in full communion with the Holy See and so in communion with more than one billion Roman and Eastern Catholic Christians around the world, the largest unified religious body on earth. This is indeed an answer to the prayers of many for whom the unity of the Church is essential.

The Ordinariate is erected in the United States but will have oversight for Canadian groups as well so is effectively a continent-wide diocese for Catholic Anglicans in the United States and Canada allowing them to bring their Anglican heritage or patrimony into the full communion of the worldwide Catholic Church under the guidance of their own ordinary or chief pastor, Msgr. Steenson.

Like the Ordinary for the United Kingdom, Monsignor Keith Newton, who has authority for reconciled Anglicans in England, Scotland and Wales since last year, Msgr. Steenson is a married Catholic priest and former Anglican bishop who will act in every jurisdictional way as a bishop save only for ordaining. Msgr. Steenson will preside at the liturgy in episcopal mitre and vestments by the respectful provision of Pope Benedict XVI thus recognizing his previous ministry as an Anglican bishop.

Msgr. Steenson’s ordinary jurisdiction or authority is now for Anglicans, Lutherans, and others reconciled with the Holy See through the Anglican Ordinariate in North America. Initially, he will be actively involved in the formation of about 70 Anglican priests who will be preparing for Catholic ordination during the Season of Pentecost (May 2012).

Working from the seminary at the University of St. Thomas in Houston, Msgr. Steenson will also co-ordinate the reception of parishes – some quite large and growing – which have been part of the Pastoral Provision for the Anglican Use dating from 1983. Including the potential candidates for priesthood and those who, like Msgr. Steenson, have already been ordained in the full communion of the Catholic Church, projections are that there may soon be over 100 priests in the North American Ordinariate, dozens of small and some large parishes made up of several thousand Catholic Anglicans.

For Canadians, this means that the first Anglican parish received into full communion this past December, St. John the Evangelist in Calgary, will look to Msgr. Steenson, for episcopal pastoral oversight and will be constituted as a parish in the Ordinariate. Other Canadian parishes and groups may seek the same oversight while co-operating with their local Latin Rite and Eastern Catholic bishops to make a concerted Catholic witness in communion with one another.

This means that, from now on, any Catholic (Latin/Roman, Ukrainian, Greek, Byzantine, Coptic, Maronite, Melkite, Syriac, Chaldean or other Catholic) may receive Holy Communion at an Anglican Ordinariate Mass and fulfill their Sunday and other obligations as Catholic Christians.

Many Anglicans, Lutherans, and other Christians who profess orthodox Christian faith will, over time, seek full communion with the universal Church through this new Anglican Ordinariate. Small at first, the attraction of beautiful English liturgy based upon The Book of Common Prayer and expressed in Anglican liturgical settings (eastward celebration and ceremonial), along with the Anglican musical, pastoral, and aesthetic traditions will attract many as regular Sunday and holy day celebrations of Mass in the Anglican Use are established in cities across Canada.

As in the UK, the Ordinary will have jurisdiction across borders. In this case, Canada will come under the US ordinary until such time as there are sufficient parishes that a Canadian Ordinary is required.

This work of the Holy Spirit is, as so often is the case, faced with many obstacles but, now established under an Apostolic Constitution, the Anglican Ordinariate in North America has been erected by the Holy See under the direction of the Congregation for the Doctrine of the Faith (CDF). The Ordinariate is now a permanent structure of the Catholic Church in England, Scotland, Wales, Canada, and the USA and will soon be established in Australia.

The potential for Christian unity that this dramatic development will have over time is its intent and though misunderstanding, opposition, and prejudice is often an initial feature of such dramatic moves for the healing of the Body of Christ, we know that as St. Paul puts it: “What, then, shall we say in response to these things? If God is for us, who can be against us?” (Romans 8)
Posted by peregrinusto at Sunday, January 01, 2012