In September -- STM Toronto is moving to the Church of St. Vincent de Paul and a new Sunday Mass time -- 12:30 noon 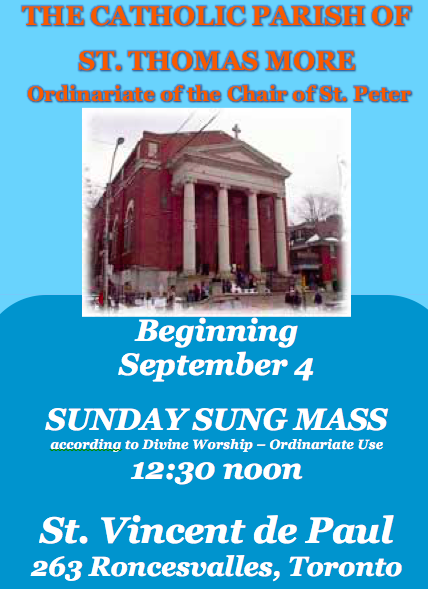 Posted by peregrinusto at Sunday, July 24, 2016 No comments:

Is Marriage a Sacrament that can be changed by a vote?

The notion that a Sacrament of the one, holy, catholic and apostolic Church of Christ could be changed fundamentally by a single vote of the representatives of a small denomination in Canada is beyond parody. Yet that is what the re-count of votes on a motion to allow “same-sex marriage” in the Anglican Church of Canada purports to have done.  Any pretence to being a branch of the Catholic Church (professed in the creeds) must surely be entirely gone and the triumph of liberal Protestantism complete in the Anglican Church of Canada.

Think of it.  Two thirds of the two hundred Anglican laity, clergy and bishops gathered in Toronto representing less than two per cent of a relatively small population in a northern country arrogantly claims that by this vote the Sacrament of Holy Matrimony is forever altered.  This limited understanding of human life, history and the teaching of the Church through millennia is matched only by the staggering hubris of such a claim.

If it were not so sad, it would be humorous.  Yet this monumental arrogance of the General Synod is thrust into the faces of the vast majority of Anglicans and other Christians around the world as being somehow “progressive.”  To paraphrase C.S. Lewis and others:  If you are progressing towards annihilation it may be time to consider another direction.

Annihilation is exactly what has been predicted by Reginald Bibby and other statisticians who say that by mid-century there will still be some property and some money but people will largely be absent from the Anglican Church of Canada. In short, with its ever-contemporary and, frankly, risible stances, the ACC has been in statistical meltdown since before the issue of changing the Marriage Canon completely overwhelmed its leadership.

The cult of political correctness has long dominated the hierarchy of North American mainline denominations. In contrast to exponential growth in Catholic and other churches around the world, numbers have fallen dramatically over the past fifty years in the denominations that have adopted one PC cause after another. Ironically, in this latest Canadian lunge for the left, it was Aboriginal Canadian delegates to the General Synod who warned their native-spirituality-hugging liberal friends that same-sex marriage violated the will of the Creator. Political Correctness meets reality.

This latest arrogation of relativistic doctrinal dictatorship will leave the Anglican Church of Canada out of communion with most Anglicans (and other Christians) around the world and in a funk with ARCIC and other ecumenical dialogue partners. What is there to talk about when a tiny fraction of an increasingly antinomian denomination claims to have changed one of the central doctrines of the Christian Church?

Compassion for all people regardless of their situation and even blessing of what have heretofore been considered irregular unions is one thing.  Purporting to change a Sacrament of the Church is quite another.

Everyone needs to catch their breath and wait for the next pronouncement from General Synod.  Baptism of animals comes to mind.  No this is not being contentious. There are those who seriously argue for the souls of animals and Anglican clergy in Toronto who have given Holy Communion to dogs. Just 165 votes at General Synod will do it, or increase the number of persons in a marriage.  Why only two? Having expanded the marriage canon in this “inclusive” way on what principled grounds can one argue against the further inclusion of those who sincerely love two or more others?

Of course, in the midst of all this democratic fury it emerges that Anglican bishops planned to ignore votes and canons at will if the latest statements of the bishops of Ottawa and Niagara are to be credited. In statements before the recount bishops Chapman and Bird revealed that they planned to “move forward” with the solemnizing of homosexual marriages regardless of the outcome of the General Synod.  These and other Canadian bishops, it appears, had decided in advance that they would simply ignore the democratic principle if the vote did not go their way.

One wonders if this applies to conservative bishops who may want to ignore the latest re-counted vote.  Likely not, but who would know in this miasma of politically correct democratic authoritarianism which now governs the Anglican Church of Canada.

All that we can be certain of is that the dictatorship of relativism is on the march and Canadian Anglicans are proudly in the bus, following the parade on the wide road leading . . . where? 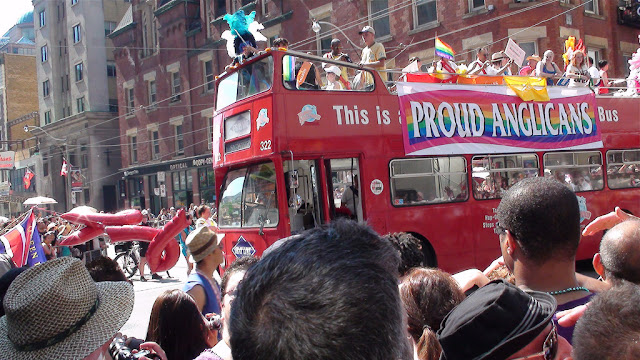 Posted by peregrinusto at Wednesday, July 13, 2016 No comments: Posted by peregrinusto at Thursday, July 07, 2016 No comments: