Novena of Blessed Mary, Our Lady of Walsingham DAY 1

Please join us in the Novena for the Anglican Ordinariates in North America, for the appointment of ordinaries by our Holy Father to serve the people being called into the full communion of the Catholic Church by means of this mission.


Here are some resources for DAY 1.

Intention: "For the appointment of ordinaries to serve those from the Anglican tradition in North America in the patrimony which our Holy Father Benedict XVI has welcomed into the full communion of the Catholic Church."

Thoughts: Our Lady heard the Word of God and put it into practice. She listened with a disciple's ear and did the Will of God. With Mary, and taught by her, we too pray "Let it be done to me according to Thy Word" (Lk. 1:38).

Prayer:  Blessed and Most Holy, Mother of the Word, intercede for us with thy Son, that we may have the grace to seek nothing other than to do His will, and the courage to live our lives in faith, trusting Him who became incarnate in thy womb, Jesus Christ, our Lord. Amen.

A selection of daily prayers for the Novena:

The Angel of the Lord declared unto Mary.
And she conceived by the Holy Spirit.
Hail Mary ...
Behold the handmaid of the Lord.
Be it done unto me according to Thy Word.
Hail Mary ...
And the Word was made flesh,
And dwelt among us.
Hail Mary ...
Pray for us O holy Mother of God, that we may be made worthy of the promises of Christ.
We beseech thee, O Lord, pour thy grace into our hearts, that as we have known the Incarnation of Christ thy Son by the message of an angel, so by His Passion and Cross we may be brought to the glory of His Resurrection, through the same Christ our Lord. Amen. (The Angelus)

O God, our Father, who prepared through the Holy Spirit the body and soul of the glorious Virgin Mother, Mary, to be a fit dwelling place for Thy Son; we recall with joy her appearing at Walsingham, grant that through her motherly intercession we may be preserved from evil and given health of soul and body. This we ask through Jesus Christ our Lord. Amen.

O Mary, recall the solemn moment when Jesus, your Divine Son, dying on the cross, confided us to your maternal care. You are our Mother, we desire ever to remain your devout children. Let us therefore feel the effects of your powerful intercession with Jesus Christ. make your name again glorious in the place once renowned throughout England by your visits, favours and many miracles. Pray O holy Mother of God for the conversion of England, restoration of the sick, consolation for the afflicted, repentance of sinners, peace to the departed. O Blessed Mary, Mother of God, Our Lady of Walsingham, intercede for us. Amen.(Anglican Pilgrim Manual)

O gracious Lady, glory of Jerusalem, Cypress of Sion and Joy of Israel, Rose of Jericho and Star of Bethlehem, O gracious Lady, our asking do not repel, in mercy all women ever thou dost excel. Therefore, Blessed Lady, grant then thy great grace, to all that thee devoutly visit in this place. Amen. (15th century Prayer to Our Lady of Walsingham)

Our Lady of Walsingham, pray for us.
Posted by peregrinusto at Thursday, September 08, 2011 No comments: 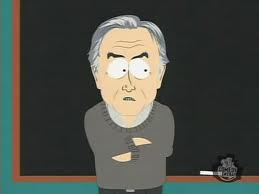 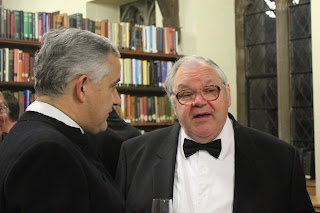 The Catholic writer William Oddie, a former Anglican, is an eminent controversialist in the UK.  He has recently taken on the London TIMES for its knee-jerk support of Richard Dawkins in his attempt to replace Bible stories with some Dawkins has written (and is now flogging) himself -- naturally leaving God out of the story.
Oddie's great talent is for taking the actual words of people like Darwin and puncturing the popular atheist's notions of what evolution, reason and science are really about in terms of God's existence.
In other words, Oddie is a voice of reason in the age of atheistic fundamentalists.  Taking on the sloppy journalism and lack of research in the London or NY TIMES is always a good thing.  The Holy Father has been doing his best to point out the scope and necessity of faith in conversation with reason and science.  This important interplay I call the Catholic Nexus.
Here are some delicious quotes from Oddie for us to try on our own Village Atheist and to share with those of good will who want a real discussion rather than a shouting match such as Dawkins et al. seem intent upon.
. . . Charles Darwin . . .  was no atheist: “The mystery of the beginning of all things,” he wrote in his autobiography, “is insoluble by us; and I for one must be content to remain an Agnostic.” He may be Dawkins’s hero: but he would have greatly disliked Dawkins’s belligerence: “Why should you be so aggressive?”, he said to the atheist Edward Aveling: “Is anything gained by trying to force these new ideas upon the mass of mankind?” “I hardly see”, he wrote “how religion & science can be kept as distinct as [Edward Pusey] desires… But I most wholly agree… that there is no reason why the disciples of either school should attack each other with bitterness.”
He was quite clear that the theory of evolution did not in any way tend towards disproving the existence of God: to one correspondent he wrote: “It seems to me absurd to doubt that a man may be an ardent Theist & an evolutionist.” He went further: “In my most extreme fluctuations I have never been an atheist in the sense of denying the existence of a God.”
As for Hume having “scuttled” the teleological argument for the existence of God, Darwin certainly didn’t think he had: he was confused by the problem of suffering in nature, but was still (wasps notwithstanding) inclined to believe that nature depended upon “designed laws” and he supported his disciple Asa Gray (who published the first American edition of On the Origin of Species) when he asserted that Darwin’s work supported the teleological argument for God’s existence rather than undermining it. 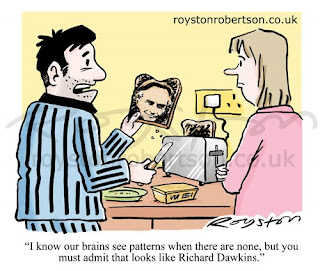 So much for the Times’s ignorant, Dawkins-worshipping opinions, which appeared, as I say, not in a personal opinion piece written by an author entitled to his or her views (Matthew Parris, for instance, is a convinced atheist and anti-Catholic, but I usually enjoy and admire his Times articles): these views appeared as the paper’s official religious outlook. The declared philosophical assumptions of The Times newspaper, that is to say, include the belief that the universe had no “sentient creator”: a creator God does not exist. What else in the paper’s philosophy is shot through by this atheistical certainty, but in a more hidden way? Who knows? In the Guardian, I would expect it: that’s one reason I don’t read the Guardian. Well, it’s now one reason why I won’t in future be reading the Times: over my boiled egg I require a certain fellow-feeling with my daily newspaper (I was, come to think of it, already aware of a certain unease). I now know not only that I haven’t presently got it, but that the Times just doesn’t care.


As for the teleological argument which the Times thinks (if that’s the word) that Hume “scuttled” (hah!) it may be worth recalling that Aquinas put it forward as his fifth logical argument for the existence of God in the Summa; it’s not absolutely required that Catholics accept it, I suppose, but I don’t see why one wouldn’t: “The fifth [argument]”, says St Thomas, “is taken from the governance of the world. We see that things which lack knowledge, such as natural bodies, act for an end, and this is evident from their acting always, or nearly always, in the same way, so as to obtain the best result. Hence it is plain that they achieve their end, not fortuitously, but designedly. Now whatever lacks knowledge cannot move towards an end, unless it be directed by some being endowed with knowledge and intelligence; as the arrow is directed by the archer. Therefore, some intelligent being exists by whom all natural things are directed to their end; and this being we call God.” As the Catechism of the Catholic Church puts it (referring to the Summa): “The existence of God the Creator can be known with certainty through his works, by the light of human reason” (§286). This argument was good enough for Darwin, it seems; I don’t see why it shouldn’t be good enough for me.
Our thanks to the estimable William Oddie who is much engaged in the conversation that the Holy Father urges us to with those who can think and believe at the same time  . . . it's rather like chewing gum and walking; once you've done it there is every reason to continue.
The Catholic Nexus involves thinking, believing and acting; but that is something Catholics have always done and it is only surprising that Dawkins and Co. don't seem to get it -- that's fundamentalists for you, they seem only able to chew gum while standing still.

Posted by peregrinusto at Sunday, September 04, 2011 No comments: