The Province of Ontario announced a “Stay-At-Home Order” to take effect throughout the province as of Thursday, April 8 for a period of one month.
PLEASE NOTE ....
The announcement does not change regulations for places of worship.
Attendance is limited to 15% capacity of the worship space. Physical distancing must be observed at all times.
STM will welcome people as usual with no advance registration while following all regulations.
Come early to ensure seating.
Choral Mass is at 12:30 noon on Sundays. 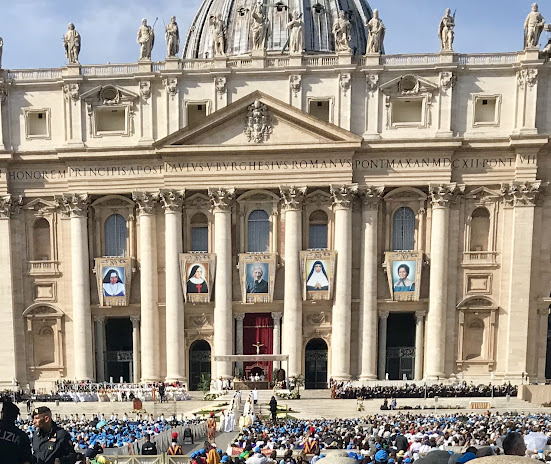 Posted by peregrinusto at Friday, April 09, 2021 No comments:

Easter at the Empty Tomb 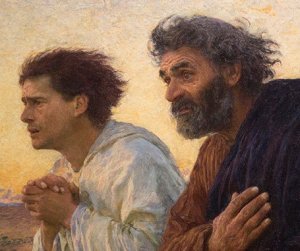 John, the Beloved Disciple and Peter at the Empty Tomb

by the Swiss artist Burnand.

Posted by peregrinusto at Sunday, April 04, 2021 No comments:

12:30 Four Part Sung Mass this Easter Sunday at St Thomas More, 263 Roncesvalles, Toronto
You may need to come early for a seat due to the 15% capacity rule.
Music to include selections from Byrd - Mass for Five Voices and Terra tremuit. 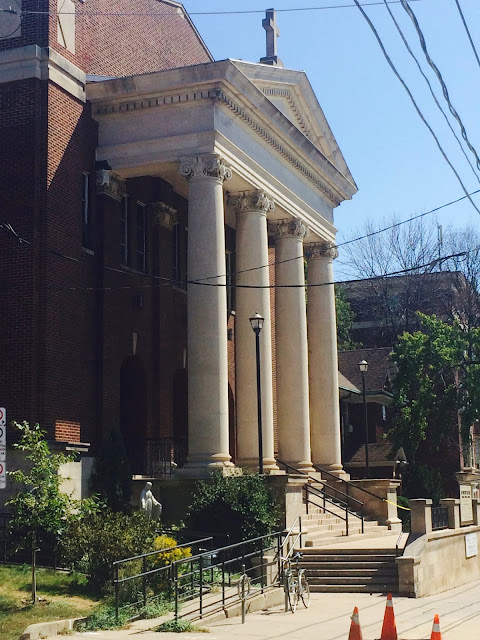 Posted by peregrinusto at Saturday, April 03, 2021 No comments:

In a recent FIRST THINGS article by Francis X. Maier - Hope and Her Daughters - March 2021, the author looks at the virtue of Hope and two elements related to Hope in the Great Tradition of classical thought (often attributed to St. Augustine).

The two beautiful daughters of Hope are Anger and Courage: Anger with the way things are, and Courage to change them for the better.

This article, which I quote in parts, pretty much sums my understanding of recent events in the USA and, to a degree, in Canada.

. . .  Hope is a choice we make in the face of suffering and disappointment. Georges Bernanos once described hope as “despair overcome”—despair experienced, suffered, and overcome through the grace of God and the cooperation of the human will. Hope has a strength that comes of struggling with doubt and fear. It has substance, which hollow optimism lacks.

. . . I am angry at the way things are. Certainly, patriotism and respect for elected officials are important Christian duties  especially vital in [Canada and the USA] where the law—not ethnicity or religion or even language—is the glue that holds us together. Disregard for the law is uniquely toxic

. . .  In that light, consider this: If tearing down public statues, defacing churches and monuments, trashing . . . history, looting and burning businesses, and months of violent rioting on the left [in the US] can be excused by some as regrettable excesses of legitimate unrest, then how can we hold today’s anger on the political right to a different standard? The same gravity of the law applies to everyone, or the law is a fraud.

. . . If our leaders want national unity—and we should pray that Joe Biden and his administration will learn from the mistakes of Trump and his critics—then they cannot demonize and punish their opponents. They cannot turn their reverence for the Republic, the law, and our public buildings and institutions on and off like a spigot, according to their party’s current agenda. If our leaders want national healing, they need to respect and listen to people they disagree with and don’t like. When they don’t, bad things happen. What took place on January 6 at the U.S. Capitol was an echo from the right of what had happened on the left in cities around the country throughout 2020. It was ugly and dangerous and self-­defeating—but rightly or wrongly, many people feel it was inevitable. Populist fury will subside, but resentment of our political class and distrust of our public institutions will grow.

. . . . Hope has two beautiful daughters. For many, and certainly for me, anger is the more attractive one. She’s a cheap date, as I know from intimate experience over the past few months. I’m angry with Donald Trump for blowing up the good work of his presidency and taking scores of decent people down with him. I’m angry with the Democratic party and its congressional leaders for their poisonous duplicity, their scheming, and their relentless undermining of Trump from day one. I’m angry with the news media for their four years of bias and lying. I’m angry with the billionaires of Big Tech for their obscene wealth and their Stalinoid attacks on free speech.

I’m angry with my generation, the Boomers, who set this cultural mess in motion fifty years ago. I’m angry with my fellow Catholics for forgetting our history and selling our birthright in order to fit in more comfortably and succeed more easily in this country. I’m angry with a pope whom I want to respect but who constantly undercuts his American bishops with baffling behavior and eccentric remarks.

. . . . C. S. Lewis warned that the pleasure of anger lies in “the fact that one feels entirely righteous oneself only when one is angry. Then the other person is pure black, and you are pure white.” It’s hard to imagine a better description of the current condition of American politics. In the long run, that’s fatal to national community. A priest friend likes to remind me that Jesus experienced anger, and anger can be a good and necessary response to injustice. But it’s how we handle that anger, whether we cling to it and what we do with it, that determines the future of our country and our own salvation.

Seneca concluded his essay On Anger with these words: “[Nothing is] great which is not at the same time calm.” Anger untempered by patience and prudence, anger fixed on revenge or vindication of the self, anger not directed to the common good, can only diminish and destroy. Absent love and the interior peace it brings, all of life is conflict, and our faith is empty. Absent love, speaking the truth is not merely useless; it becomes an instrument of self-righteousness and a weapon against others.

What does this mean for Christians in America? The Augustinian priest and scholar Robert Dodaro wrote a book some years ago titled Christ and the Just Society in the Thought of Augustine. In his book and in my private exchanges with him, Dodaro made four key points about Augustine’s view of Christians and politics. Archbishop Charles Chaput often relied on them in his own reflections on the political role of Christians, from which (with his permission) I borrow in what follows.

First, Augustine never offers a political theory, for good reason. He doesn’t believe that human beings can know or create perfect justice in this world. Our judgment is always flawed by our sinfulness. Therefore, the starting point for any Christian politics is humility, modesty, and sober realism. Second, no political order, no matter how good, can ever constitute a just society. Errors in moral judgment can’t be avoided. These errors also grow exponentially in their complexity as they move from lower to higher levels of society and governance. Therefore, the Christian needs to be loyal to her nation and obedient to its legitimate rulers. But she also needs to cultivate a critical vigilance about both.

Third, despite these concerns, Christians still have a duty to take part in public life according to their God-given abilities, even when their faith brings them into conflict with public authority. We can’t ignore or withdraw from civic affairs. The classic civic virtues named by Cicero—prudence, justice, fortitude, and temperance—can be renewed and elevated, to the benefit of all citizens, by the Christian virtues of faith, hope, and charity. Therefore, political engagement is a worthy Christian task, and public office is an honorable Christian vocation. Fourth, in governing as best they can, while conforming their lives and their judgments to the content of the gospel, Christian leaders in public life can accomplish real good. Their success will always be limited and mixed. It will never be ideal. But with the help of God they can improve the moral quality of society.

What Augustine believes about Christian leaders, we can extend to the vocation of all Christian citizens. The skills of the Christian citizen are simple: a zeal for Jesus Christ and his Church; a conscience formed in humility and rooted in Scripture and the believing community; the prudence to see which issues in public life are vital and foundational to human dignity, and which are not; and the courage to work for what’s right. We don’t cultivate these skills on our own. We develop them together as Christians, in prayer, on our knees, in the presence of Jesus Christ.

My favorite Christmas carol is “Of the Father’s Love Begotten.” The words are nearly 1,700 years old. They’re taken from a poem by Aurelius Prudentius Clemens, one of the great Christian writers of the fourth century. The work of Prudentius was shaped by his belief that the recent conversion of the Roman Empire, or at least of its emperors, had marked the start of a new and brilliant human epoch of light and peace. Less than fifty years later, barbarians were at the gates of Hippo, Rome was sacked, the empire was falling apart, and Augustine was writing the City of God, indicting Rome’s pride, corruption, and brutality. And yet, here we are. Put bluntly: No matter how badly we screw things up, God never abandons his Church or his people.

History, then, is the great teacher of our need for humility based on man’s record of failure, sin, and cruelty. But it is also a powerful source of hope. There are other sources of hope today—one being the existence, even in our current turmoil, of so many lay Catholics and other lay Christians who do live their faith in the public square with articulate clarity. Another is our bishops. Yes, our bishops. They take a boatload of criticism from everybody, some of it deserved. But most are good and solid men, and some are courageous teachers of the faith.

My last reason for hope is quite personal, but I think a version of it resides in each of our lives. In December my wife and I celebrated our fiftieth anniversary, and I still look at her with desire and delight. (I can’t speak for her, but she has stuck around.) We owe those five decades to our faith in Jesus Christ, the support and love of generous Christian friends, and the beauty of the Church, which is always there, always true, and always more vivid than the warts and blunders of her people and her leaders. Each of those fifty years was consumed by everyday difficulties and joys, which so often obscure the larger picture. But in retrospect, our life has been a long record of blessings, in our work, in our friends, and especially in our children. We have a son with Down syndrome, and he’s a gift to us as parents and to each of his siblings because he makes us human, and he prevents us from ever dismissing the dignity of any individual soul. Everyone is invited to some version of this kind of joy—a life that means something beautiful because God is good and wills it for us.

Hope feeds and grows on the experience of love, the will to persist in that love, and the letting go of anger, no matter how vicious or lunatic the times. Nations rise and fall. Ours has no special immunity. But in the meantime, God and his love for us endure. When we really believe that, and trust in it, and conform our personal and public lives to it, then we have something important to contribute to our country and to the world.

Francis X. Maier is a senior fellow in Catholic studies at the Ethics and Public Policy Center and a senior research associate at the University of Notre Dame.

Posted by peregrinusto at Saturday, April 03, 2021 No comments: