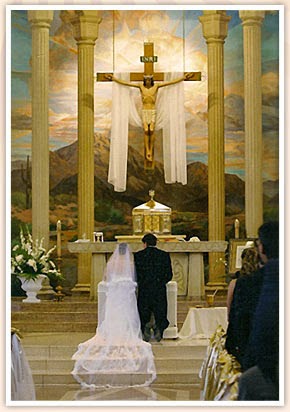 “For this reason a man shall leave his father and mother and be joined to his wife, and the two will become one flesh. This is a great mystery and I am applying it to Christ and the Church”  Ephesians 5: 31 – 32.

In addition to quotations from Holy Scripture, the documents of the Magisterium quoted here are noted with the following abbreviations:

Holy Matrimony and the "Ladder of Love"

It is difficult for non-Catholics, as well as for many Catholics, to understand and to appreciate the Church’s teaching on Marriage and the Sacrament of Holy Matrimony.

For Catholics, marriage is much more than a contract; it is a life-long covenant and a sacrament of the Church.  Not only is marriage regarded by the Church as holding a position of importance well above most relationships on what Plato referred to as the “ladder of love,” Holy Matrimony is fundamental to understanding what the Church of Jesus Christ is – its ecclesiology.

“This partnership of man and woman constitutes the first form of communion between persons” (GS 12.4).

Expressions of love other than within Holy Matrimony – friendship, affection, filial devotion, etc. – partake in the ideal of love but they are not sacramentalized by the Church, a sacrament being an essential component of the Church’s constitution as the agent of redemption and salvation for humanity (CCC 738).

This sacramental understanding of Holy Matrimony (Christian Marriage) is linked to the Church’s concepts of grace and of sin. Sin is due to the fallen nature of human beings. Many human relationships and interactions are disordered and so do not reflect God's purposes. The Church teaches that human beings require the grace of God to be forgiven, to be healed, and to enter into the communion with God for which we are created and within which we grow and develop in love. As Pope St. John Paul put it: “Love is therefore the fundamental and innate vocation of every human being” (FC 11).

Secular society largely persists with false conceptions about Catholic doctrine (teaching) because most of the elites and members of the media have no grasp of Christian anthropology in the context of God’s love.

The image and likeness of God in humanity (Genesis 1:27) relates to the gifts of intellect and will that God has shared with us (GS 12.3). The power to reason and to will is not what we have in common with the animals but is, rather, the power we participate in through the one and only transcendent God who has become incarnate (human) in the person of Jesus Christ. As humans, then, we “unite the spiritual and material worlds” (CCC 355) as Jesus did most perfectly.

However, unlike Jesus, who is the second person of God the Holy Trinity, we, as human creatures of God, commit sin, i.e. we fail to do what is best, we miss the mark, or we actively do what is evil. So it is that we need forgiveness and grace in order to move up the ladder of love.

Unlike what some Protestants believe, Catholics hold that as creatures we have an active part in co-operating with God’s grace (CCC 2000). By God's grace we are co-creators with God. We are baptized into the Body of Christ in order to actively choose the grace offered us and to be part of the loving process of salvation, which is not a single moment or one event but a lifetime journey with Christ (DV 3; Cf. Genesis 3:15; Romans 2: 6-7; 6: 19,22).

How does this Christian anthropology affect the Catholic understanding of Marriage? 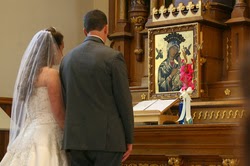 First of all, in terms of nature, male and female are created for one another. The human race literally depends upon the union of man and woman. Catholics see this as part of the Natural Law, which may be comprehended by reason. The union of man and woman is a first instance of humanity co-operating with God in physical nature but, most importantly, doing so through acts of the will and in the power of the Holy Spirit (CCC 1624, 1641 – 1642).

In theological terms, the fiat, the yes, of Blessed Mary agreeing to become the mother of Jesus Christ (Luke 1:38) is a paradigm for the human spiritual response to God’s initiative by willing what God wills. God has chosen to allow creation to depend, in part at least, upon our decision to respond or not to God’s initiative through creation.

We are given the gift of Revelation in and through Jesus Christ, i.e. the gifts of truth and love that could not be arrived at by reason and logic alone. The divine Logos is the self-communication of God in the person of Jesus Christ (CCC 456-460). Because of the Incarnation of Christ, God’s loving communication with humanity through the Logos is conveyed through various media:

•   through Creation in all its variety, beauty, and wonder
•   through the Word of Revelation in Holy Scripture
•   through Sacred Tradition, which formed the canon of Scripture and accompanies the life and liturgy of the people of God from generation to generation
•   through the Magisterium, or teaching authority, of the Church – the Body of Christ (CCC 787-791)

The same Logos moves in Creation, Scripture, and Tradition and is continually interpreted in each age by the tangible and authoritative Magisterium of the Church articulated through the Petrine Office of the Holy Father, the symbol and guarantee of unity in Christ. This is where Christian anthropology meets ecclesiology  – the divine community is established in human society for its salvation from sin and death. 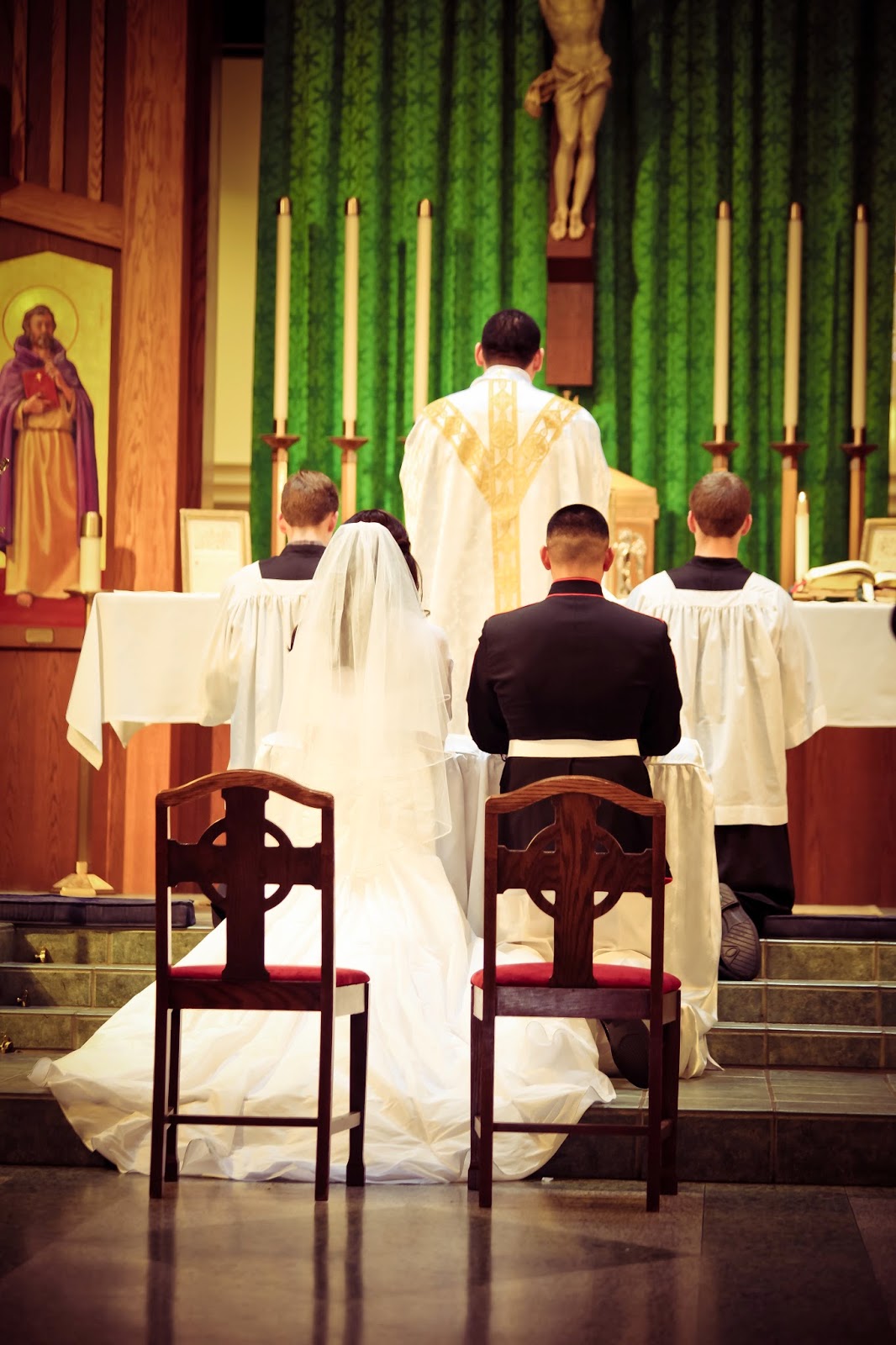 The Sacrament of Holy Matrimony is, then, both an affirmation of the role we play in nature – God’s creation (GS 47.1) – and a participation in the spiritual reality of love that the Logos reveals and communicates. Christian Marriage is a paradigm of the Church; both exist for the creative and loving purposes of God (CCC 1661).

By its very nature, marriage must be an open participation in creation at all levels: physical, communal, moral, ethical, and spiritual (FC 13).

In and through Holy Matrimony individuals may become spiritually actualized together in the life of God, the Holy Trinity. This actualization develops for individual persons by entering into a loving lifelong covenant with another person of the complementary sex in the order of creation. Unity comes about by means of the will of  God the Father, “creator of heaven and earth” (Nicene Creed, CCC 1604).

Spiritually, actualization may develop for individuals in other committed relationships. Such fruitful relationships flower within the vows of celibacy, chaste friendships, etc. Holy Matrimony, however, is sacramentalized, confirming its critical importance both for humanity generally and for the Body of Christ, the Church, in particular.

Another aspect of doctrine as it relates to anthropology and marriage involves our spiritual development and sanctification by means of our commitment within the sacrificial bond of Christ's redemption. This bond is forged through the incarnation, life, death, resurrection, and ascension of God the Son, Jesus Christ (Matthew 11:29 -30; 19:6; Mark 8:4).

Our participation in the covenant of marriage mirrors the deep doctrine of love lived out in the atonement that Christ makes for humanity’s sin. Christ's is the complete and unbreakable baptismal covenant into which we enter by grace as we do in Holy Matrimony. Both are indissoluble covenants based upon the love of God mediated in the sacramental relationship of individuals within a greater whole.

Finally, the relationship of love in Christian marriage, as in Baptism, is sustained in the communion of the Holy Spirit (CCC 1616-1617). God is forever present and the grace and power of the Holy Spirit confirms our forgiveness and our union with Christ. This grace is especially mediated through the sacraments in which reside grace to heal and strengthen us.

Over time, living within this tripartite bond of love – Father, Son and Holy Spirit – acts to free individuals from a preoccupation with self and from the effects of sin while incorporating us ever more into the life of the Body of Christ, the Church. This deepening incorporation allows the individual’s creative and loving efforts to be co-ordinated with the will of God and with others in the covenanted community, a community which is open to and invites all people.

Communion in the Holy Spirit is actualized by the love and grace of God through the co-operation and mutual respect of individual redeemed humans who are empowered through their fiat, i.e. their freely willed co-operation, by grace, with the Divine will (LG 11.2; 41).

In light of this covenant relationship, as mentioned at the outset, Holy Matrimony is at a very high level on the "ladder of love," as well as being central to the ecclesiology or structure of the Catholic Church (CCC 1655 – 1658). 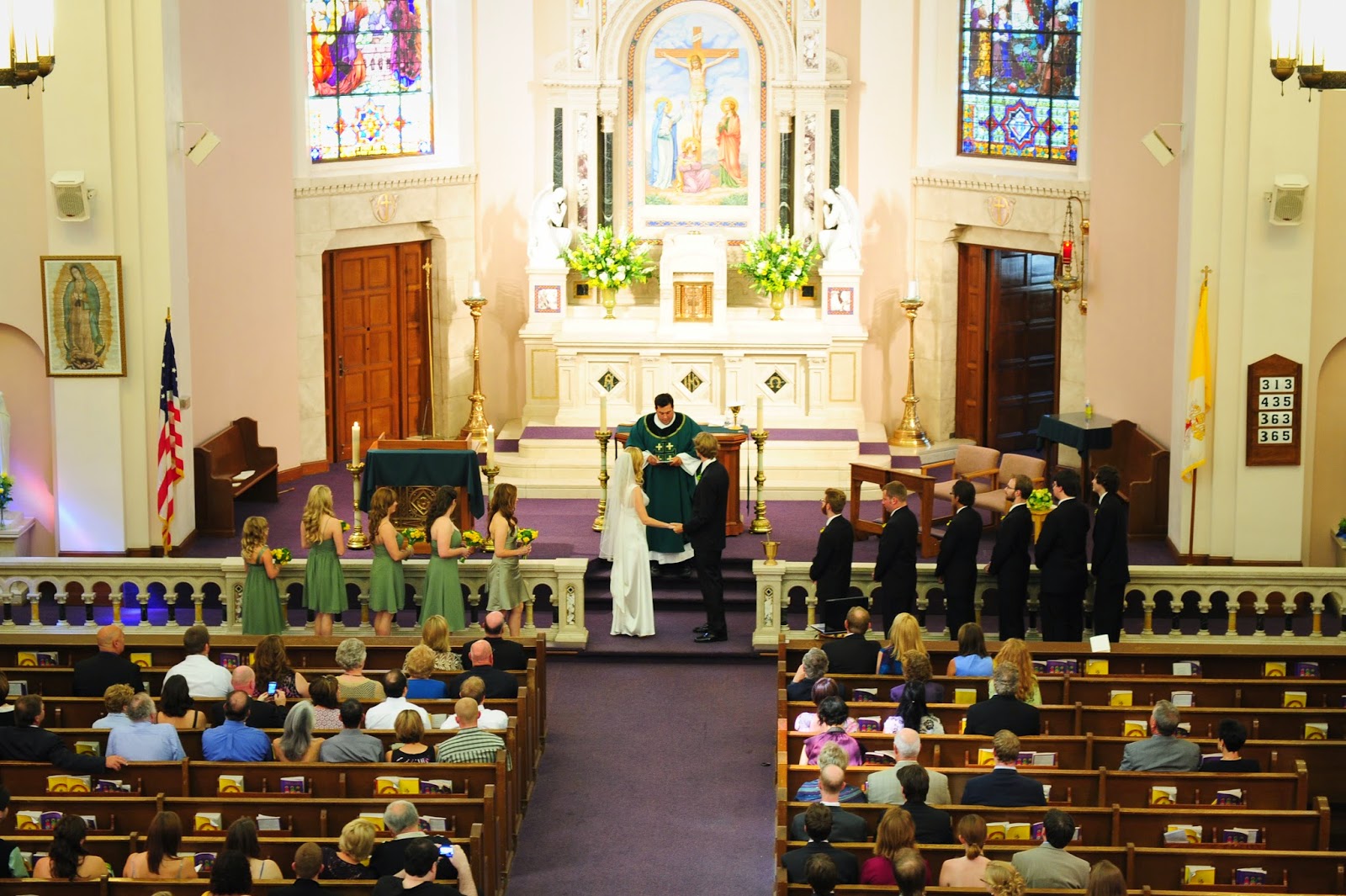 In terms of the role of the Catholic Church vis a vis secular society and government in Canada, the Church offers its blessing to the Christian man and woman who publicly exchange vows without impediment (previous marriage or other canonical impediments, e.g. consanguinity, age, mental capacity, etc.).

“According to the Latin tradition [the Western Church] the spouses as ministers of Christ’s grace mutually confer upon each other the Sacrament of Holy Matrimony by expressing their consent before the Church” (CCC 1623).

How the state chooses to record legal relationships including marriage is a separate matter and cannot interfere with the sacraments of the Catholic Church. The Church has little control over what the state does but the Church cannot, either, be required to recognize as “marital” relationships partnerships that do meet the basic requirements of free consent given between one man and one woman, regardless of whether or not the state calls these “marriages.”  Certainly, what the Church recognizes as "natural marriage" applies to many marriages of one man and one woman contracted outside the Sacrament of Holy Matrimony. Though these marriages do not participate in the sacramental life of the Church they are both valid and may be a locus of God's grace.

The model in some European countries, where all must exchange marriage vows publicly before a state official and then must register their relationships in a secular register, is something Canada may have to consider.

Catholics would comply with state requirements and then go to the Church to celebrate, in the context of Mass, their mutual consent which creates the sacramental bond and life-long covenant.

This arrangement would free Catholic bishops, priests and deacons  in Canada from the requirement that they be registered and regulated by civil authorities in order to officiate at marriages. Priests would not be required to act in any way for the state nor be regulated by secular authority with regard to the Sacrament of Holy Matrimony.

For the reasons noted above, the Church does well to draw a clear line between Holy Matrimony and the laws and regulations relating to “marriage” as now defined by the secular state in Canada.

Admittedly, this compromise is not ideal but in this way the Sacrament of Holy Matrimony may continue to be celebrated by Christians (and Catholics in particular) without compromising the integrity of the Church or the minsters of the sacrament --  the baptized man and woman.

Posted by peregrinusto at Thursday, February 05, 2015