"All generations shall call me blessed." . . . What were the generations before the Blessed Virgin Mary? 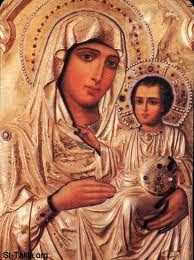 In conversation at a dinner party with a non-practising Jewish man (he had been raised in an Orthodox Jewish family), the question of Jesus' genealogy came up.

He told me that he had, some time before, gone to the Toronto School of Theology with a request to have the Luke 3 and Matthew 1 genealogies explained since neither, in his view, referred directly to Mary's genealogy.

After saying that the Luke genealogy was that of Mary's lineage, the somewhat embarrassed TST official failed to prove his point from the text and had to concede that the Luke 3 text was traced to Joseph as well.

The point this man was trying to make was that Mary may not have been Jewish. I had never heard such a claim. He went on to say that there was no evidence and that she might well have been from one of the many other tribes or cultural groups in and around Galilee.

This got me to do some searching and thinking. The following are some thoughts that I have collected from various sources on the lineage of the Blessed Virgin Mary and Marian theology generally.

BTW - My Jewish friend insisted that the practice of tracing Jewish lineage traced from the mother's line has not always been the custom in Judaism. He claims that this was a later development and was not the practice in the time of Jesus earthly ministry since people looked to their tribal male ancestors as witness the lists of ancestors in both Matthew and Luke.

The following are some responses to questions about Mary's heritage and her theological role.


Questions about Marian Theology
A.  How is the Blessed Virgin Mary connected to the claim that she is the Messianic “Daughter of Zion”, uniting in herself the three principal aspects of the Messianic People of God – spouse of Yahweh, Mother-Zion, Virgin Israel?
The Blessed Virgin Mary (Luke 1: 48) is the Messianic “Daughter of Zion” as:
1)   Spouse of Yahweh:  Blessed Mary is the Jewish woman who co-operated with God, making possible the Incarnation of the eternal Son of God. In light of this co-operation Mary is both the daughter of Zion and the Jewish mother of the longed-for Messiah, Jesus of Nazareth (Catechism of the Catholic Church, hereafter CCC, 488-489). She fulfills the call and hope of Israel by uniting her will with that of the one and eternal God known to her Jewish community as Yahweh.
This same God reveals to humanity through the action of the Incarnation the three persons of the one God: Father, Son and Holy Spirit. Mary’s son, the only begotten of the Father, is Jesus (Hebrew: Yeshua) the Saviour of humanity, both fully human and fully God. By the will of the eternal Father through the action of God the Holy Spirit and in co-operation with Mary, the Daughter of Zion, Christ came to be born of the immaculate flesh of Blessed Mary, becoming the long-expected Messiah promised by Yahweh.

2)  Mother-Zion: Blessed Mary embodies Zion, the holy city, through whom God reveals the fullness of his grace and mercy in the person of Jesus. Mary, the daughter of Zion participates as Mother-Zion in the fulfillment of the messianic promise in time and space.
Jesus, who himself replaces the Temple of Jerusalem (Zion), is the son of the daughter of Zion. In his person, Jesus, as son of Mother-Zion, embodies humanity in complete union with God. Jesus, as son of Israel (Zion), through Mary (if Jewish identity is being traced through the female line) and/or Joseph (as adoptive father) brings salvation to Israel.
The Gospel according to Luke affirms what was generally known, namely, that Mary was a cousin of Elizabeth, who was the Jewish wife of the priest Zechariah of the priestly division of Abijah. Elizabeth was part of the lineage of Aaron and so both she and Mary were of the tribe of Levi (Luke 1:5;1:36).
We know from the Hebrew tradition that Moses’ brother Aaron was married to Elisheba of the tribe of Judah, so all his descendents are from both the tribes of Levi and Judah (Numbers 1:7 & Exodus 6:23). The relationship of Mary with Elizabeth on the maternal side (hence Mary’s visit to Elizabeth while pregnant) shows that Mary, like Joseph, to whom she was betrothed, was of the House of David and so of the tribe of Judah. Marriage within the tribe was common and even expected in that period. The genealogy of Jesus through Mary is from Nathan, the third son of King David and Bathsheba (Luke 3). Joseph has his genealogy from King Solomon (Matthew 1).
The independent sources of evidence for this genealogy and the life of Jesus generally are as strong and in many cases stronger than evidence for most personages in the ancient world. The main Jewish source, Josephus, is independent of the Roman source, Tacitus, who is independent, in turn, of the Christian sources i.e. the Synoptic Gospels and the Pauline letters (The Cambridge Companion to Jesus, Markus N. A. Bockmuehl, ed. 2001, pages 122-126).
As St. Paul tells us: salvation is for the Jews first and then for all (Epistle to the Romans).  Consequently, Mary is also Mother of the Church (Lumen Gentium, hereafter LG, Chapter 8: 53, 63) in fulfillment not abrogation of the Law of Israel. She is the “New Eve” of the House of King David (Luke 1:27) and is the fulfillment of the promise to the daughters of Zion (Zephaniah 3: 14, 17a). She becomes the “Mother of Christians” (hodigitria), the one who “shows the way” (CCC 2674).
3)  Virgin Israel: The purity of the daughter of Israel provides the essential condition for the Immaculate Conception i.e. a means for the eternal and all good God to become incarnate through flesh that is untainted by sin.
Mary is a virgin of the Chosen People so that the revelation of God to the People of Israel is for the Jews first and then for the Gentiles (Romans 1:16). As noted, Mary –  the Virgin Israel – becomes the Mother of the Church (LG, Chapter 8). This belief is of ecclesiological significance in that Mary provides the bridge from Israel to all humanity by bringing God into the world for her own people and then for all (the universal salvific will of Yahweh). This is the fulfillment of the Messianic Promise, the will of God to bring salvation to all people by means of the co-operation of a human person, the Daughter of Zion. 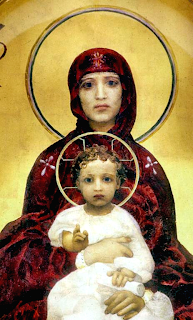 B.  If Mary’s life is an example for us by her response to God, what is the ultimate meaning of her virginity?
Mary developed her intimate relationship with Christ as a virgin preserved from Original Sin (Irenaeus, Ambrose of Milan, Tertullian and Augustine). She chose to obey the will of God by responding “yes to God” when asked to bear the incarnate son of God. The incarnation of Jesus was made possible by her purity in that she was filled with grace and so through her immaculate body Christ, the Messiah of Israel, took flesh in the Incarnation by the power of the Holy Spirit (Nicene Creed). By virtue of her own Immaculate Conception (CCC 490) Mary was prepared to make her fiat (Luke 1: 28-38). By her response Mary became, by grace, was able to become the mother of Jesus the Christ (Messiah) by means of the Virgin Birth (CCC 495 - 511).
Therefore, Mary shares in Jesus' victory over sin (Immaculate Conception – CCC 491- 492 ) and death (Assumption – CCC 966). As Mother of the Church (CCC 975), she shares this great victory with all who say “yes to God” in Christ by prevenient grace. We become her children by grace and we grow in faith by responding to her Son, Jesus Christ, who has redeemed our flesh by the perfection of his sacrifice in and through his immaculate flesh, which is possible because Jesus is “born of the Virgin Mary” (Nicene Creed).
In Blessed Mary we see the unity of virginity and motherhood with the understanding that Mary's spousal relationship to God is that of a virgin – her total gift to God. Her motherhood in relationship to the Church is, then, a result of the grace of her virginal self-giving to God. Mary’s blessing for us is due to her faith in Christ. She is, as a result of her affirmation, the first Christian and as such shows us the way to our own victory over sin and death through grace. She is the exemplary realization of the Church responding to God by grace and working in the world to redeem the whole human person in the flesh and spirit. 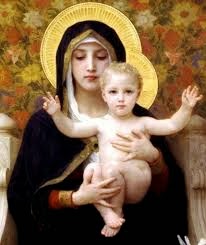 C.  How can we explain the connection between the revealed truth of Mary’s divine motherhood (Theotokos) and her other special gifts: the Immaculate Conception and the Assumption?
The doctrine of the Immaculate Conception affirms that Mary, preserved from original sin, becomes by virtue of her fiat, Mother of God Incarnate (Council of Ephesus), the Theotokos (CCC 495). Being the “All-Holy”, Panagia (LG 56), Mary is preserved from sin in order that she may be a fit vessel for the incarnation of God (CCC 490).

Her virginal motherhood is “accessible only to faith” (CCC 498), a faith which, in the words of Ignatius of Antioch’s letter to the Ephesians, is understood through the “connection of these mysteries with one another” (Ignatius, Letter to the Ephesians 1, 1: AF II/2, 76- 80). The virginal motherhood of Mary is confirmed in the doctrine of the Assumption of Mary as the Aeiparthanos (Ever-virgin). In this doctrine we see that the virginal motherhood is sanctified in the Dormition of Blessed Mary (CCC 966).
The Church holds together these teachings about the gifts of Mary despite the fact that people at the time of the Apostles, as they are today, were sceptical and unbelieving (1 Corinthians 2:8).
The unified doctrine of Blessed Mary points to the working of God’s grace (“we have received all these things by grace.” – John 1:16), grace given to humanity from our conception until our entrance into the Kingdom of God after death. As it has been for Mary, by grace, so it may be for all those baptized into the life of God the Holy Trinity. Mary prays for her children as Mother of the Church while all generations call her blessed (Luke 1:48) and seek the intercession of the Blessed Virgin Mary, Advocate, Helper, Benefactress and Mediatrix (LG 62).

Posted by peregrinusto at Saturday, October 05, 2013