“I am the resurrection and the life. Whoever believes in me, even though he die, yet shall he live.”  John 11: 25

In the face of what many modern people find to be the most challenging Christian doctrine – the resurrection of the dead – today’s Gospel begins with details about a particular situation, in a particular location with particular friends of Jesus. Lazarus and his sisters Martha and Mary.

In the particularity which speaks of detail and of humanity, we are told at the beginning of John 11 that it was this Mary, the sister of Martha and Lazarus,  who had anointed our Lord's feet in a foreshadowing of his death. (John 11:2)

Jesus’ disciples then raise their very human concern with death, warning Jesus against returning to Judea. Thomas even predicts that they will “die with Him” if they go back. These are specific people in very specific and challenging situations.

When Lazarus is raised, St. John, the beloved disciple, reports that his tombstone is taken away. John also records Lazarus’ burial cloths and head covering. These are all details that he later reports from Jesus’ empty tomb. (John 20:1,6,7) 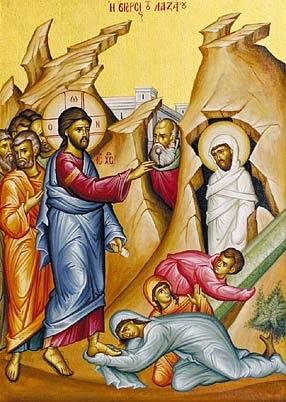 This connection to the details of death means that Jesus is connected to us – to our humanity, our vulnerability and our death. We are his beloved friends as Lazarus is his friend. Since we are his friends who have been baptized into his death which he shares with us, we also share, by grace, his resurrection.

Like the blind man in last week’s Gospel, Lazarus represents all humanity – our humanity. He represents all who will die – everyone. Lazarus is a specific example that Jesus loves all of us and that he wants to liberate all from sin and death.

St. John also recalls the blind man in his account read today ( John 11:37). Like the man’s birth in blindness, Lazarus’s death, the difficult fact which challenges our faith, is interpreted by Jesus to reveal “the glory of God”. (John 9:3)  Jesus’ words and deeds give us insight, insight for those who believe: “Could not he who opened the eyes of the blind man have kept this man from dying?” (John 11:40). 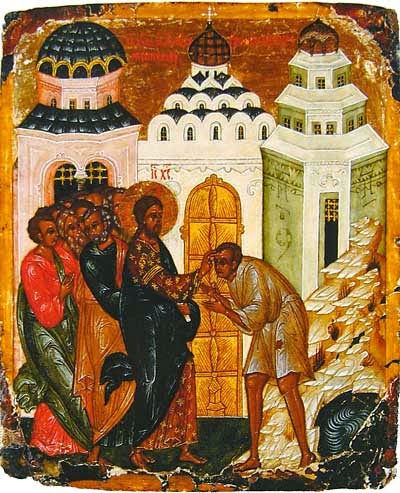 In the economy of salvation we are not prevented from falling into sin and death but Jesus redeems us and raises us individually from death, if we put our faith in him.

By his raising of Lazarus and by his own Resurrection, Jesus has fulfilled Ezekiel’s promise in today’s First Reading. Jesus has opened the graves so that we rise with him.

He has given us his Spirit so that we may live now and forever with him. This is the Holy Spirit that Paul writes of in today’s Epistle. The same Spirit that raised Jesus from the dead gives life to us who were once dead in sin.

Faith and its sacraments, the particular graces of the Church for each of us, are the key. We believe, as Martha does, that Jesus is the resurrection and the life.

“I have promised and I will do it,” God assures us in the reading from Ezekiel.

We live by sharing his life of grace, by sharing in Christ's body at Mass and by living in grace, serving Jesus in and through others, other particular people whom we encounter on our path to Jerusalem, the Golden.

“I am the resurrection and the life. Whoever believes in me, even though he die, yet shall he live.”