Pray for Pope Francis and Patriarch Bartholomew in Jerusalem

This may be the greatest ecumenical encounter of our lifetimes with implications for centuries ahead. 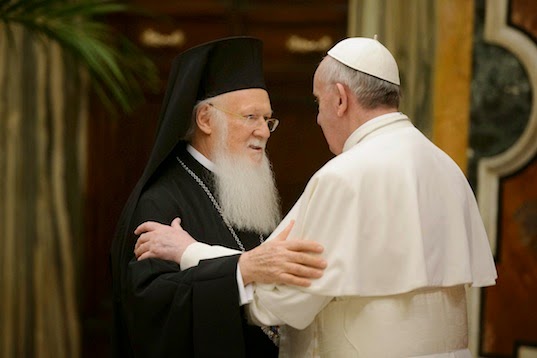 Here are some excepts from the Toronto Globe and Mail. A good background article by Patrick Martin:

. . . . This weekend, the Bishop of Rome – Pope Francis, spiritual leader of a billion Catholics – and the Ecumenical Patriarch of Constantinople – Bartholomew, first in honour among all Eastern Orthodox bishops and representing 300 million Orthodox Christians – will meet in Jerusalem to bury this great schism. The two religious leaders are commemorating the 50th anniversary of the meeting of Pope Paul VI and Patriarch Athenagoras, who took the first step toward reconciliation when they shook hands in Jerusalem and ended the mutual excommunications issued by the Pope and Patriarch back in 1054.
. . . . Except for one failed attempt at reconciliation in the 15th century, the two churches remained in a state of animosity – and sometimes of conflict – for 910 years. That ended in 1964. But, since then, progress has been slow in reconciling their differences and bringing the two sides closer together.
It was only last year that Bartholomew attended the inauguration of Francis as pope, the first time the head of the Orthodox Church had participated in a papal ceremony in almost 1,000 years. Bartholomew took the occasion to invite Francis to join him in Jerusalem to put meat on the ecumenical skeleton their predecessors had established 50 years ago. The often spontaneous Pope accepted and this weekend’s visit to the Holy Land is the somewhat surprising result.
. . . . This Pope’s visit to the Holy Land “is unlike any of the three that have gone before,” says Michael Higgins, a Vatican expert at Sacred Heart University in Connecticut. Time spent with Israelis is very limited on this trip and there will be no pastoral visit to the large Christian Israeli community in the Galilee that was the hallmark of previous papal pilgrimages.
Even if it means giving short shrift to Israel, said Mr. Higgins, “Francis has other priorities he is determined to establish.”

Rare unity at the Holy Sepulchre
Reconciliation with the Orthodox churches is the Pope’s top priority. As Francis said in December: “In some countries they kill Christians because they wear a cross or have a Bible, and before killing them they don’t ask if they’re Anglicans, Lutherans, Catholic or Orthodox.”
“We’re united in blood, even if among ourselves we still haven’t succeeded in taking the necessary steps towards unity.”
Nowhere is Christian disunity more in evidence than in the faith’s most important site, the Church of the Holy Sepulchre, believed to be the place of Jesus’s burial and resurrection. Feuding among Christian denominations for place and position inside the church is so intense that no one branch of Christianity could be entrusted with the key to the building, lest it lock the others out. For that reason, the great iron key has been entrusted for centuries to one Muslim family, the Nusseibehs.
Hoping to rectify the need for unity, Pope Francis and Patriarch Bartholomew are scheduled to meet four times during the Pope’s overnight stop in Jerusalem. 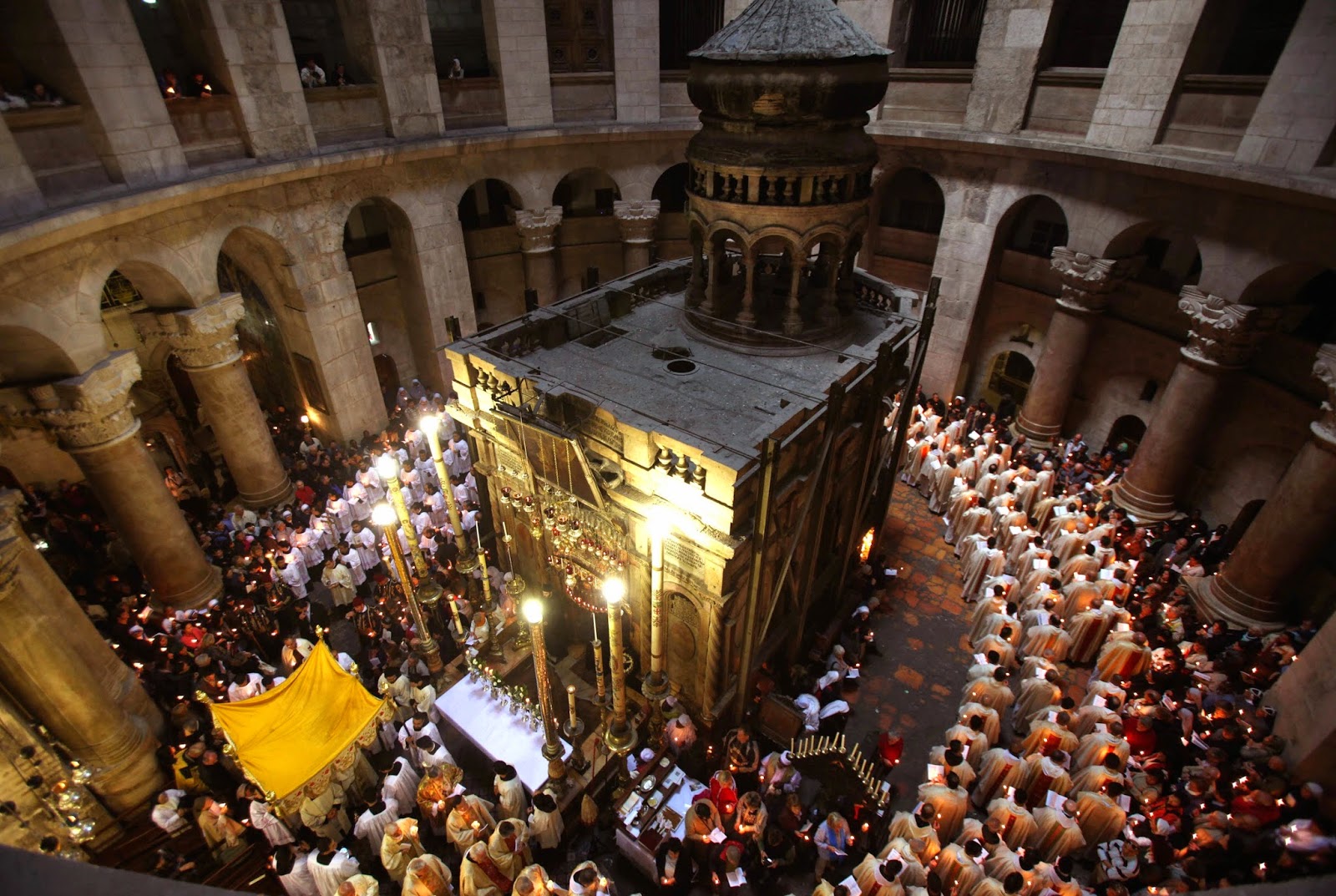 Watch for the most significant meeting at an ecumenical service Sunday evening, when they, along with a representative of the Armenian Church, will pray together at the Church of the Holy Sepulchre. The event will be “extraordinarily historic,” said Vatican spokesman Father Federico Lombardi, since the three communities normally observe strict separation when they worship in the church.

Recognizing the state of Palestine
The second priority is to show “solidarity with the people who suffer,” said Father Jamal Khader, the spokesman for the papal visit, referring to Palestinians.
To that end, watch for Pope Francis to break new ground in Bethlehem.
According to the itinerary, his first act upon landing in Bethlehem by helicopter from Jordan will be to pay “a courtesy visit to the president of the State of Palestine,” Mahmoud Abbas, at the presidential palace. Note the use of the term “State of Palestine,” a term that Israel, the United States and Canada would never use, and would likely object to.


Recognizing the ‘Jewish state’
Francis is acutely aware of the need not to slight Israel.
When Pope Paul VI visited the Holy Land in 1964, the Old City of Jerusalem and the West Bank were occupied by Jordan. Though he continued on to Christian sites around the Sea of Galilee in northern Israel, the pontiff declined to officially recognize the state of Israel.
. . .  Pope John Paul II made history in 2000 by visiting and recognizing the state of Israel on his pilgrimage. However, his successor, the German Benedict XVI, upset his Israeli hosts when, during a visit to Yad Vashem, he failed to acknowledge the Holocaust.
Watch then for Pope Francis to balance his recognition of the state of Palestine with recognition of Israel as a “Jewish state,” something the current Israeli government has ardently sought.

International claims to Jerusalem’s holy sites
The Pope’s other priority is to assert the claim of the Catholic Church and other religions to the holy sites.
While the Vatican recognized Israel in 1993, following the signing of the Oslo Accord by Israel and the PLO, it never has recognized Israel’s claim of sovereignty to any part of Jerusalem. Its position stems from the 1947 UN plan to partition Palestine into an Arab state, a Jewish state, and an international zone for the Jerusalem area.
Since 1993, the Vatican’s position has evolved, Father Khader said, and “it no longer advocates a corpus separatum.”
Rather, “it supports the two states [Palestine and Israel] deciding matters of sovereignty,” Father Khader explained, “provided there are international guarantees for free access to all holy sites.”
The nature of Francis’s visit and the lengthy meetings with Bartholomew underscore the international importance of Jerusalem, says Archbishop Fouad Twal, Latin Patriarch of Jerusalem. A man held in high regard at the Vatican, the Patriarch recently called for the holy city to be recognized as “the capital of humanity” with special international status.
Reading between the lines of the papal itinerary, Mr. Higgins believes the Pope is making a statement about Jerusalem, about its importance in building bridges between peoples, and about the Vatican’s interest being more than simply access to holy sites.
“Francis has shown the willingness to speak his mind freely,” Mr. Higgins said. “Listen carefully to his extemporaneous remarks about Jerusalem,” he advised.

Unexpected guests
In the casual manner by which Francis has become known, the Pope is being accompanied on his visit by two old friends from Argentina: Rabbi Abraham Skorka, and a Muslim imam, Omar Abboud.
At the last minute, the pontiff also agreed to be joined by Maronite Patriarch Beshara al-Rai from Lebanon. The Patriarch, who is a cardinal in the Catholic Church, announced on his own he would join the Pope in Jordan on Saturday and travel with him to Jerusalem. The news raised eyebrows in the Vatican and temperatures in Lebanon since that country remains officially at war with Israel.
Heavy security
Consistent with Francis’s desire to reach out to the people, and much to the concern of Israeli security forces, the Pope has refused to travel in an armoured vehicle during his Holy Land visit.
And it’s not as if he has no enemies in Israel. In the past few weeks there have been several incidents of anti-Christian graffiti, some of it including death threats, being painted on Christian sites. Last week there also was a demonstration on Mount Zion by 200 to 300 Jewish zealots protesting the Pope holding a mass in the room believed to have been the site of Jesus’s “last supper,” which sits atop the tomb of ancient Israel’s King David.
To avoid any mishap, Israeli security forces are closing many of Jerusalem’s streets and keeping crowds at a good distance from the pontiff.
In Bethlehem on Sunday, Palestinian security is expected to be somewhat more relaxed, bringing to mind some chaotic scenes of 1964, when Pope Paul VI attempted to make his way along the Via Dolorosa in the Old City of Jerusalem, then under Jordanian control. The crowds pressed in so close that soldiers had to use rifle butts to clear a path.
Posted by peregrinusto at Friday, May 23, 2014